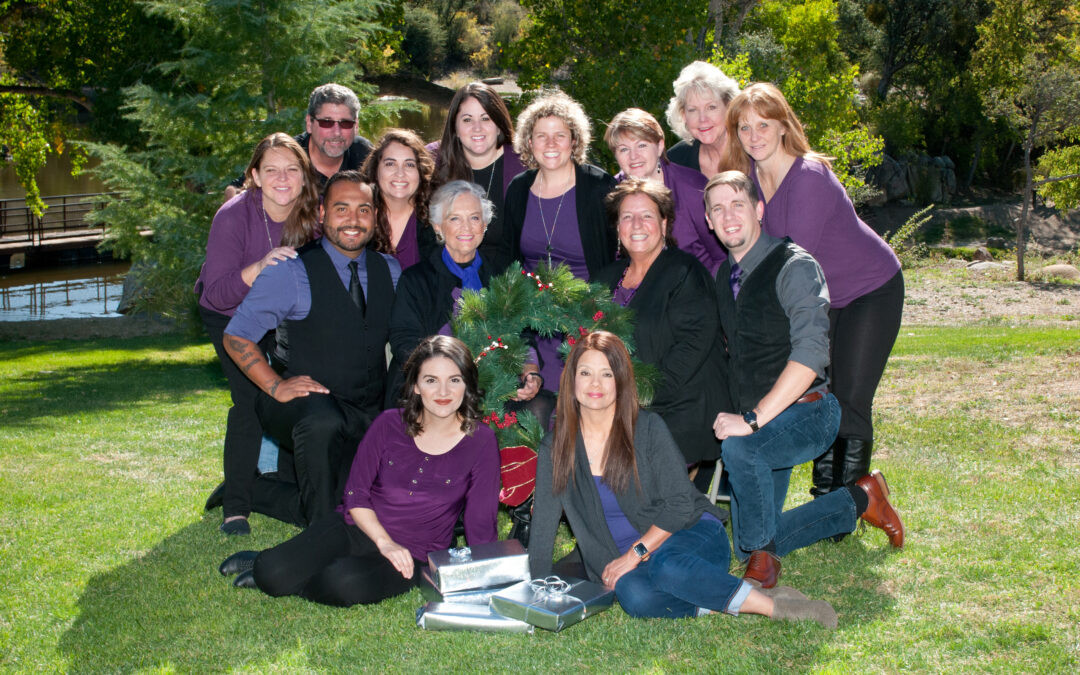 Before Betty DellaCorte helped launch Stepping Stones Agencies in Prescott 40 years ago, she opened the first-ever women’s shelter in the country.

And before that, she was the victim of domestic violence. She was an interior designer whose professional confidence didn’t translate into her personal life; she thought the abuse was her fault … until she discovered she deserved better—and she had the power to create it.

Betty’s take on ending domestic violence is unique and comes from her own experience. During a recent interview, she said she knows firsthand about the personal development work necessary to become empowered to leave an abusive situation (read more about Betty’s story in the tab below).

Robin Burke, Betty’s daughter and the President and CEO of Stepping Stones, explained that rather than only responding to victims of domestic violence with a law enforcement approach, which relies on offender accountability, Stepping Stones comes from a mental health perspective, which upholds victims’ rights and validates traumatic experiences while at the same time empowering victims to break old patterns and create powerful inner and outer transformation.

Because of this, Robin said, Stepping Stones is not only different and special, but also the best at what it does.

“When someone first comes to us,” she said, “it’s like they’re drowning and we say, ‘You’re drowning. Let go of that life preserver. I promise you won’t drown.’”

Through a variety of therapeutic services and educational programs, Stepping Stones advocates (highly-trained specialists who may have been victims of domestic violence, themselves) educate victims about the power they have.

“It’s letting them know what they’re carrying,” Betty said. “That’s just reality. We go way back in and show them how [victimization] is learned behavior … It’s mind-blowing for them to realize it’s not something that comes from them—it’s something learned from childhood.

This is a realization Betty experienced herself, as she began to take an honest self-inventory and look at what she was responsible for. She was able to look back at her father’s life and her grandparents’ lives and see that abuse was all they’d known.

The first step was in admitting she couldn’t control those people and that her life had become chaotic and unmanageable.  Next, she had to get help from others and a higher power.

Only then was she able to begin healing.

“In those days, I didn’t realize it was a learned behavior,” she said during a recent interview. “As it evolved, I realized it’s something I’m carrying.”

When people come through Stepping Stones programs and realize they can change the patterns with which they and their family members have been imprinted for generations, “it’s very exciting,” Betty said.

Cori Burke, Robin’s daughter, Betty’s granddaughter, and the Director of Services at Stepping Stones, said the role of the educational classes is not just to provide people with the knowledge that they’ve been operating on longstanding patterns, but also to encourage them to take responsibility to use their new knowledge to change their lives.

“That’s also what makes us different,” she said, “is taking a look at the things you do have control over, and letting go of the things you can’t control. It takes a lot of hard work, and it’s transformative.”

“When you start recognizing it,” Betty said, “that releases you. It’s amazing.”

With the generosity of businesses, civic groups, faith-based organizations, and individuals in the West Yavapai County communities, and the income generated from its enterprises, Stepping Stones Agencies offers a variety of services for survivors and also for community members, including:

Gaining Control – and Empowering Others to do the Same

Stepping Stones Founder Recalls the Path that Led Her to Break Free from Domestic Violence, Start the First Shelter in the U.S., and Make this Work Her Life’s Mission

As a child, Betty DellaCorte didn’t have much control over her life. Her parents decided which schools she went to, and although she wanted to be an artist, they wanted her to be a secretary. So it only made sense that they’d pick out her first husband. He was a good man, said Betty, who’s now 86, but she didn’t love him.

“You’ll learn to,” her parents told her, but she didn’t. He barely spoke to her, unless he was drinking wine—and then he was fun and friendly. That’s when she began to believe that people who drank were always cheerful.

Away from her parents, Betty finally gained the courage to divorce her husband five years after they were married.

So when she met the man who would become her second husband, she was intrigued: he drank all the time, and he was always friendly and dancing and singing. She thought she’d be so happy.

Then the abuse started—and Betty thought she deserved it. As a child, her father had hit her—as his father had done to him. Her mom never protected Betty, because that was all she knew.

She was so ashamed of the abuse, and of whatever she’d done to cause it.

For years, she said, she tried to fix herself, the house, the things she was doing wrong. At one point, her husband’s son brought home an Ann Landers column about what to do if your family member was an alcoholic. She remembered thinking, “Your father’s not an alcoholic, he just drinks a lot.”

Meanwhile, she was an interior designer. The confidence she felt in her career didn’t come home with her, and she thought there was no way out.

One day, believing that she’d die if she didn’t, she tried to kill her husband. He lived, but that was her turning point.

She started going to Al-Anon meetings and was surprised to see other professionals there—teachers, an attorney, a social worker.

“They just filled me up,” she said.

At one point, she told the attorney there she planned to divorce her husband. He asked why. She said, “Look at these bruises,” and he said, “Wrong answer.”

Different versions of this conversation happened several more times until finally Betty answered his “Why?” with, “Because I deserve better.”

“Right answer,” the attorney said. “Now you’re going towards something, not running away from something.”

With the attorney’s help, she divorced her husband. She sought emergency shelter, and didn’t feel comfortable going to a homeless shelter, as back then they were very bleak. She vowed that when she got back on her feet, she’d create a beautiful, home-like space for women seeking shelter.

Meanwhile, she started taking in other victims of domestic violence.

Then, less than a year later, in early 1972, she opened the Rainbow Retreat in her own home Shelter in Phoenix. It was the first shelter of its kind in the United States. The Rainbow Retreat Shelter relied on government funding, and Betty wanted more autonomy. So in late 1972, she opened the privately-funded Faith House, on her own property in Glendale.

Several years later in 1980, Betty’s daughter Robin Burke was living in Prescott when the American Association of University Women, Prescott Chapter (AAUW) performed a survey of the service needs in the community.

The most significant need that emerged: a shelter for victims of domestic violence.

The AAUW wanted to bring the Phoenix Faith House model to Prescott, and that’s when Stepping Stones was born—with Robin at the helm.

In 2000, Bank One contributed $1.34 million to build a new Faith House in Phoenix: a 28,000-square-foot shelter that looks like a bed and breakfast.

“That’s when I retired,” Betty said.

She’s since moved to Prescott and said she enjoys living near her family.

The day I left my abuser, my life and my daughter’s life had been threatened. It was the morning of my youngest daughter’s third birthday. After leaving the house, I treated the girls to a special late breakfast at Cracker Barrel in Prescott Valley.

It was in the Cracker Barrel parking lot, after loading the kids back in the car, that I finally took a chance: I called a national domestic violence hotline and the woman on the phone told me to call Stepping Stones.

I drove from Cracker Barrel to Stepping Stones, our new safe haven. I was broken down in tears, but I pulled myself together for interviews with police officers and various other tasks to ensure we were safe and ready to move forward.

The four-month program at Stepping Stones gave me hope, tools, and resources. I graduated into their transitional program where I received an apartment, and I regained my confidence and control over my destiny.

It has been a hard journey; it’s unbelievably scary to let go and step into an unknown, even when you know it’s right.

When I ran away from my abuser, I had to face a new reality. Like the Arizona sun at midday, questions burned at the forefront of my mind: where would I go now and what would I do?

I had just moved our lives entirely to Prescott. I had a part-time job I loved, and school in Prescott all lined up for my two daughters. In my heart, I knew staying in the area and remaining amongst my new friends—who had become my surrogate family—was the only way I could get through this heartache and still feel any hope for the future.

Fortunately, Stepping Stones helped me thrive in a new life.

I don’t want to think about where I would be right now if it weren’t for Stepping Stones. This organization saved my life and gave my girls and I a fresh start and another chance at a happy, secure life. The resources offered by Stepping Stones are vital to the health and safety of families in our community. 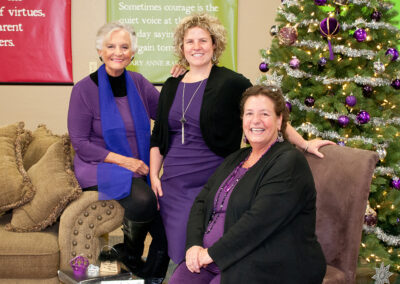 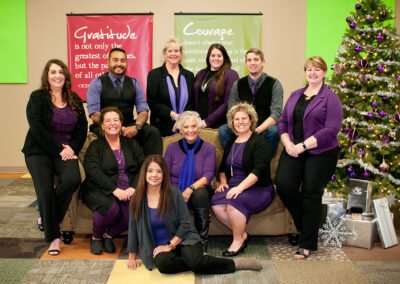 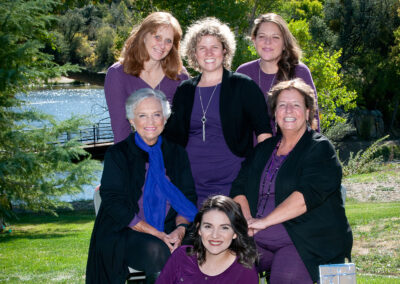 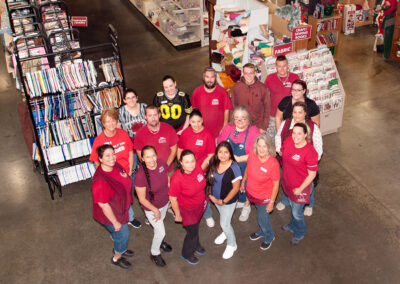