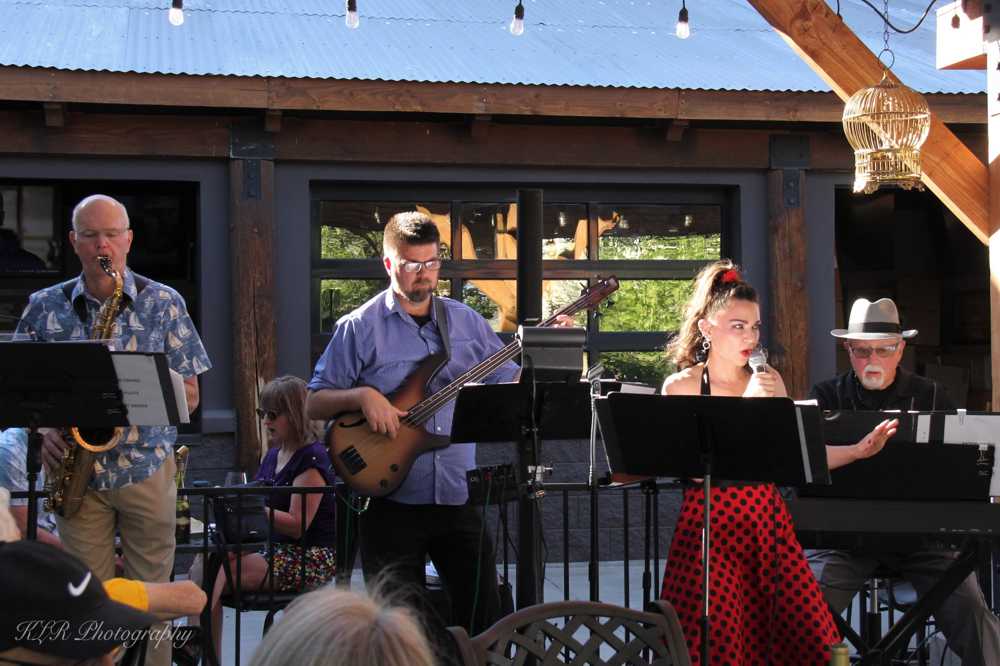 When most people think about the music coming out of Prescott, they’d expect country or bluegrass, but Leah Morales and her band, Mood Swing, are trying to change that. Mood Swing is part of an emerging local jazz movement.

Although she is just in her thirties, Leah is bringing back jazz standards that were popular before 1960, and people all over town are falling in love again with these great vocal jazz classics.

PWM: Leah, vocal jazz music is not typically what you hear around Prescott, and it is so difficult to sing. So, what drew you to the jazz genre?

Leah: When I was a kid, my mom did a lot of productions with the Prescott Fine Arts Association, now known as Suze’s Prescott Center for the Arts. Some of these productions included the Summer Repertory Theater, directed by a local favorite, Casey Knight. Every summer these productions would include some of the best Jazz Standards of all time; Frank Sinatra, Ella Fitzgerald, Duke Ellington, Jonny Burke, Harold Arlen and more. I loved it. Even as a nine-year-old, I was drawn to the beautiful melodies and interesting chords and progressions and the clever lyrics. When I started to play the French horn in 7th grade, I started to listen to instrumental Jazz, starting with Chuck Mangione and Count Basie. When I was in high school, I started buying CDs of my favorite artists and started singing it and playing it on my horn. At one point I was playing in a brass quintet with local trumpet legend Steve Annabale after he arranged a quintet version of “Take Five.” I was hooked.

After high school I joined the Marine Corps as a Bandsman, primarily as a French hornist, as well as a vocalist.

PWM: Tell me more about your services in the Corps.

Leah: I enlisted in the Marines in May of 2005 and graduated Marine Corps Basic Training at Marine Corps Recruit Depot Parris Island, South Carolina in August of 2005. From there I completed Marine Combat Training at Camp Lejune, North Carolina and was then sent to the Armed Forces School of Music in Norfolk, Virginia. I graduated from the Basic Musician Course in March of 2006 and shipped out to Okinawa, Japan, where I served with the III Marine Expeditionary Force Band from until November of 2008. While I was overseas, I performed as a French hornist in the Concert Band, Marching Band, Ceremonial Band, Brass Quintet and Woodwind Quintet. As a vocalist, I sang in the Jazz Combo, Concert Band and the Party Band, which is a rock band that covers songs from multiple genres ranging from rock to country to pop. I got to travel all over Asia to perform in multiple capacities. I served with the brass quintet in the Philippines in 2006 and 2007 for Operation Goodwill, where we entertained children at orphanages with our music as well as handed out toys donated to the Toys for Tots foundation. I performed at the Budokan in Tokyo for the 2006 Armed Forces Marching Festival, and performed at the foot of Mt. Fuji. I also performed on Iwo Jima for three consecutive years for the Memorial Services held for the American and Japanese military personnel that lost their lives during World War II. Additionally, I performed in Guam, Thailand, and South Korea.
After my time with III MEF, I went back to the School of Music for the Unit Leader’s Course and then finished out my service with the Parris Island Marine Band in Beaufort, SC. Other Leadership roles I served in while active included Acting Enlisted Conductor, Low Brass Section Leader, Safety/HAZMAT Non-Commissioned officer in charge, Music Library Non-Commissioned Officer in Charge, Sergeant of the Guard, Squad Leader, and Fire Team Leader.

PWM: I hear that you are a teacher as well as a performer.
Leah: Yes, I teach Voice and horn lessons at The Movement Studio in Prescott Valley, where I also serve as the Director of Music. I am the Music Director for the children’s musicals that we put on a few times a year. I also perform and work with the Vaudevillian Burlesque Troupe, where I help with whatever is needed pertaining to the music aspect of the shows, from getting the band situated to helping out our performers with the music they are singing.

PWM: How did you connect with the guys in Mood Swing?
Leah: I got a call from Professor Chris Tenney at Yavapai College asking me if it’d be ok to give my contact information to a Jazz Combo that was looking for a new vocalist. Professor Tenney and I play together in The High Desert Brass Quintet, and he had heard me sing before. Of course I jumped at the opportunity, since there aren’t many Jazz Bands in the area looking for vocalists, and I met with Don Grise and the rest of the band for an audition. From the very first time we played together, the group just clicked. Mood Swing is made up of top-notch players. In fact, we enjoy having musicians who are among the best in the Prescott area.

Leah: Mood Swing loves to play for private parties. Our performances are often taking place in clubs, but we also play for community events and wedding receptions. Mood Swing is a dance band and we love to play for people who love to dance. We have a very wide range of music to choose from, so if we’re asked to set a particular mood, we can do it.

PWM: Swing dancing seems to be making a comeback.

Leah: At our events, we often see people both young and old out there on the dance floor enjoying the music and dancing. We have a few couples who follow us on Social Media so they can come out to dance when we are playing somewhere. It’s really fun seeing familiar faces in the crowd that have such a good time dancing to our music. There has been a renewed interest in swing dance – especially among millennials and the younger generations.

PWM: Thank you Leah, and thank you for taking the time for this interview. I’ll give you the last word.
Leah: If you want to know more about my band, Mood Swing, visit our website at www.moodswingnaz.com. We’d love to entertain your guests at your wedding, party, or special event.