An Adventure, Every Day 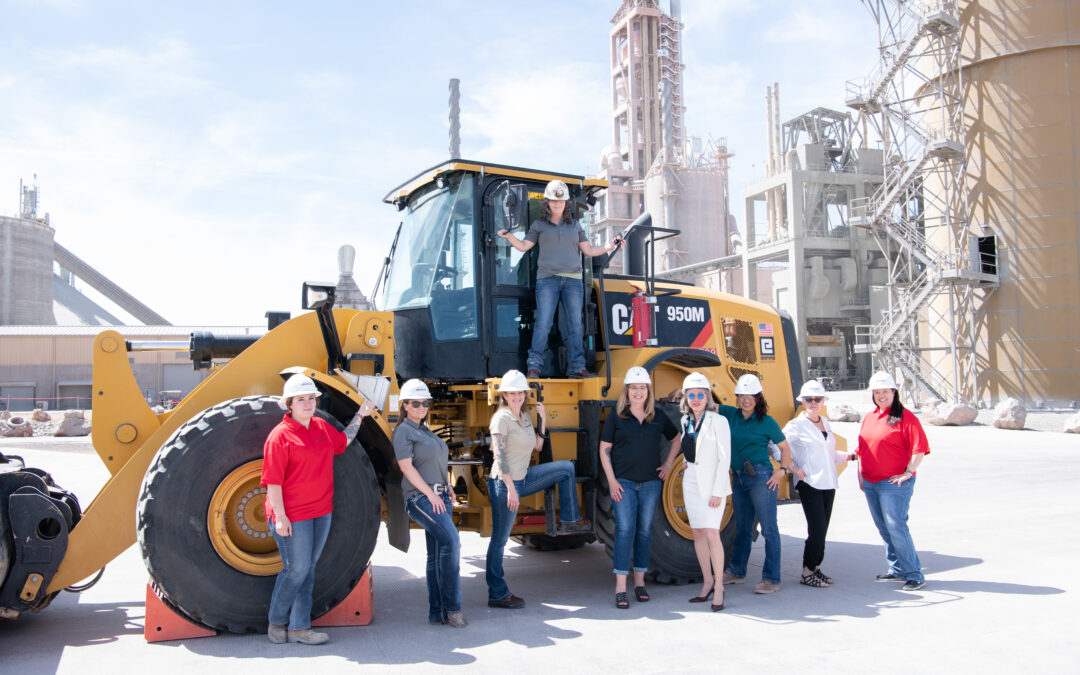 Of the 113 employees at Drake Cement in Paulden, only 10 percent are women … and those women work in every part of the company, from the office to the lab to engineering.

“Everybody just fits,” said Karen Otis, Administrative/Community Involvement Coordinator. “If people come in here and they want to do the job, we’d love to have them. Everybody’s done a really good job for us.”

The women sounded off recently, sharing with PWM their experiences working at Drake.

“Whether it was opening up the blend silo for repairs or building the stairs into the electrical rooms or hanging the guards on the conveyor belts,” Nancy said, “I got to work on every piece of equipment at the plant at some phase.”

When the plant manager offered her a job as a lab tech she “realized the great opportunity that was presented” and took it.

Since she started in 2010, she’s pushed herself to learn new tasks, and she’s had some unique opportunities: she traveled to other plants to learn how they operated and went to a class in Kentucky to learn microscopy.

During her tenure, Nancy said, she’s learned that “I am more resilient in completing my goals that I previously thought.”

“Every day is different, and it all starts with leaving the house,” Berenice said. “The beautiful scenery driving up the road in different weather conditions is an adventure in itself.”

Berenice, who started working for Drake in 2008, and enjoys working on different projects, in different areas of the plant, because “you don’t know what the day will bring.”

“It is definitely an adventure,” she said.

Although she initially wasn’t sure what the job would be like and she’d never worked in construction, building the new cement plant was exciting. She loves having the opportunity to learn, and working with a great team of people who respect and support her. In fact, working alongside such people has brought out the extrovert in Berenice!

For Adriana, working at Drake felt like it was meant to be. While visiting her husband in Arizona on a break from her HR position in Honduras, she received a phone call from Drake, requesting an interview. She was set to head back to Honduras, but her flight was canceled, which gave her an extra day to schedule her job interview with Drake.

“The rest is history,” she said, calling working at Drake “an amazing adventure.”

“Having worked in both Central and South America I enjoy a multi-cultural work environment. Drake represents 11 languages and 9 countries so once again I have the best of both worlds. By this, I mean I live in the best country in the world but enjoy having the passionate Latin environment I have always enjoyed. I can use my native Spanish language when needed, especially when communicating with Drake’s corporate headquarters in Lima, Peru.”

“Especially living and working through this pandemic, I learned how we are a team, all working for a common cause to succeed as a company while taking care of our families.”

Karen learned about Drake from another employee, and said every day is an adventure at Drake. Although she didn’t initially believe there would be anything for her at Drake, she’s truly enjoyed working there. Her favorite thing about it: “The people!”

During the economic crash of 2008, Karen found herself unemployed after 25 years in the escrow and title industry. Drake had just broken ground, and Karen met the Senior VP of Cement Operations and was offered an office position at the company. At the time, the setup featured a single construction trailer, no phones, and about five employees—mostly engineers.

She called working for Drake “a great adventure … from construction to commissioning of the plant, first truck loaded, first blast in the quarry until now.”

“The people I get to work with are all amazing, and the opportunity to support them is so rewarding,” Karen said, adding that Senior Vice President of Cement Operations Cliff Ayers was an amazing guy to work with.

The job itself is always changing and never boring, and it’s helped Karen get comfortable with public speaking, in-person and on the radio (she helped restart Women in Business with the Chino Valley Chamber of Commerce in 2012 and has emceed several events through that, and she also emcees Drake’s annual holiday party and is in charge of the community and events piece for Drake’s communication meetings).

When Marissa started working at Drake, the company was still commissioning the plant; she’s been there from the beginning. “Seeing the company grow has been a great experience,” she said, and there is always something new to learn.

She’s enjoyed the people and the opportunities to grow, and has learned that “I can handle more than what I thought I could.”

Professional development is important to Alisha, who was “excited for the challenge” of working at Drake. Although the cement industry was new to her, she said, “I know if I set my mind to something, I can do it.”

Her favorite thing about working at Drake: “the people I work with and having a work-life balance. I love my job and spend many hours working on challenging and exciting projects, but I am also able to enjoy life outside of work with friends and family.”

While some days can be “downright challenging,” Alisha said, she’s learned to “take a deep breath.” “If you can remember to stay positive, the difficult days can be just another way to grow in both your career and life in general.”

Sylvia called working at Drake “quite challenging, from the beginning up to this day.”

She “loved the idea of growing with Drake at the same time, from the time it was built to the time of producing cement.”

Her favorite thing about working there: “The opportunities given to all employees and the friendly environment.”

“I try to treat every day as an adventure,” Shanna said. “You never know what life is going to throw at you.”

In her previous position, Shanna was the only woman who worked at a granite company in Texas. So when she applied at Drake, she didn’t give much thought to whether it was “woman-friendly.” “I think if you want, you need, it, go for it,” she said.

Her favorite thing about working at Drake: “the people and the friendly environment.”

One theme that emerged in hearing from Drake’s women is that the company provides so much opportunity. Women and men are able to move up, try positions in different departments, and become leaders in the company.