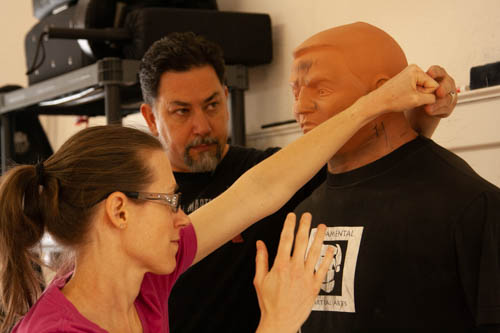 Self-defense is a skill anyone can and should attain, according to Scott Shephard, owner of Fundamental Martial Arts (FMA).

“Everyone is capable of improving their ability to protect themselves,” he said. “Learning self-defense is a great alternative or addition to regular fitness programs.”

Scott’s focus is to help empower and educate the community on this critical topic.

FMA is rooted less in traditional martial arts and more in essential self-defense.

“In today’s world, anyone could become a target,” he said.

Scott believes it is critical for everyone, not just his students, to acknowledge the reality that an attack is a possibility, and that being prepared is vital.

The first step: stretching the senses. Scott explained that when people can stretch their senses, they start to heighten their overall awareness. For example, by becoming aware of and appreciating the elderly couple holding hands, breathtaking sunsets, and puppies walking on the Square, other more subtle nuances become a part of a person’s awareness as well.

“The more you absorb good things in your environment,” Scott said, “the more you will practice environmental awareness, and the more able you become to prevent potential trouble.”

Scott emphasizes the importance of accepting a situation if one presents itself, and knowing fear is healthy. The intention behind learning self-defense, then, becomes giving fear fear a directive and using it to become a driving force to take action.

“You act, your fear is channeled. When timing is right, use fear as the trigger to take action,” Scott said.

An attack may never present itself, and hopefully that is the case, but awareness, acceptance and action become the key elements to an effective response if one does occur.

Scott explained that when practicing self-defense, the primary mission is to separate from the attacker. He teaches a concept called, “B.E.A.T. I.T.” (Brain, Eyes And Throat, with Intentional Targeting.

“Take the hardest, most easily accessible tool (weapon) you may have, say even your fingers, and focus an attack to one of [your attacker’s] weakest areas, say his eyes.”

Scott teaches his students to disable an attacker’s function rather than just try to inflict pain, doing what is required and legally justified in order to escape to safety.

“This approach is more likely to create an opportunity to escape than some kick to the groin, pounding on his chest or slap across the face. Be vicious, be as efficient and determined as can be and get out of there!”

Learning self-defense is important when it comes to preventing trouble, and it has other benefits, as well.

Kimberly Albarran, a dedicated student of FMA, said she has gained unshakeable self-confidence in her ability to defend herself. “I can kick some major butt today!” she shared enthusiastically during a recent interview. Her awareness and confidence pour over into other important areas, she said, including her private and business life.

She said, “I don’t have self-doubt or anxiety like I did a year ago, and I attribute that to my self-defense training with Scott.”

Scott has been instructing martial arts and self-defense for 32 years. FMA offers a variety of classes and workshops for the community, including one-on-one private sessions, semi-private sessions and group classes for women, children, and men. Customized group classes are also available. FMA now offers guided somatic meditation classes to promote overall health and wellness and will offer yoga classes in the near future.

For more information about FMA training, contact Scott Shephard at 928.925.2642.