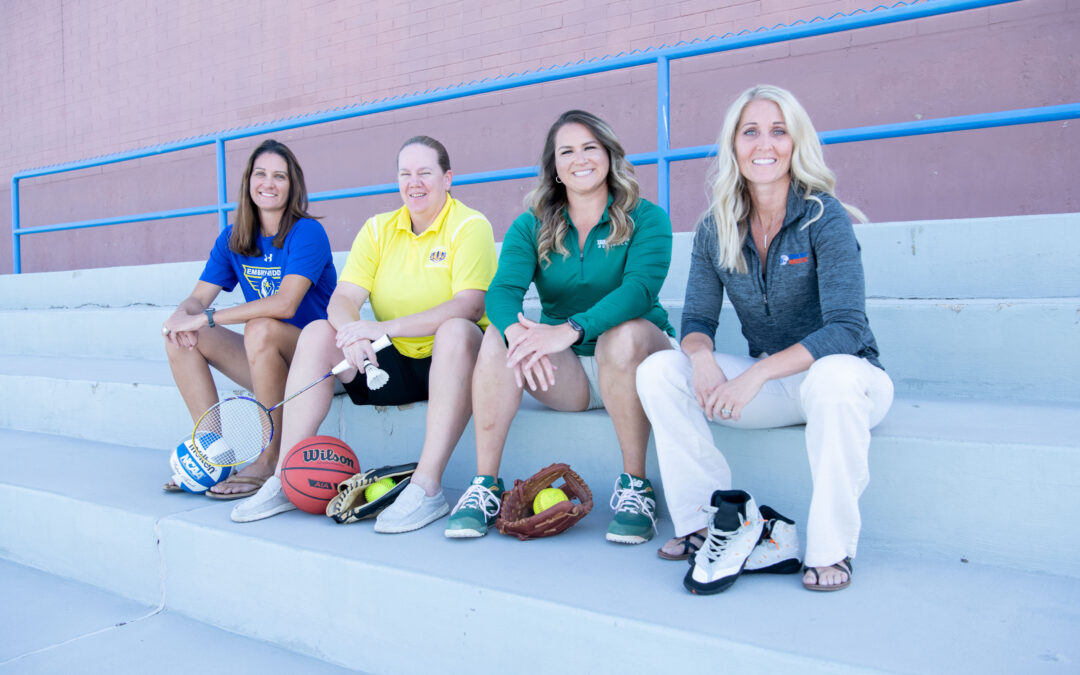 First, that coaching student-athletes is more about time together than about winning. Second, these coaches view their role as more of a life coach and role model than simply someone giving direction on the field or court. Finally, the community created through sports is unlike anything they’ve known anywhere else.

Each of these ladies said she’s grown alongside her team, making each season a unique and special experience.

As a graduate of the University of Arizona with a Veterinary Science degree, it is intriguing that Bobbi Yoder would wind up coaching sports. Specifically, she’s the head varsity coach of the girls’ basketball and badminton programs and assistant varsity coach of the softball team at Prescott High School.

Although sports were part of Bobbi’s life throughout her childhood and into college, she never saw herself coaching. Bobbi worked for 20 years in the veterinary world but eventually found herself looking for a change. Her memories of life lessons and the camaraderie of a team drew Bobbi back to sports.

“I can’t imagine my life without coaching now,” she said.

Bobbi transitioned from being a vet to working in Special Education, and she’s now Prescott High School’s online class coordinator. The position enabled her to build a rapport with students. Then, 13 years ago, she was presented with the opportunity to coach, and her love for sports won her over. She said her ability to build student relationships inspires her every day, and that her deepest joy is being able to coach and work with student-athletes every day. She is able to pass down the same life lessons she learned as a student-athlete. The most impactful of these was one her family and coaches taught her: “You’re going to get out of [the experience] what you put into it,” she said, “and that’s what I strive to show and teach these girls every day.

For Sharon Haese, coaching has become a lifestyle. She is the head softball coach at Bradshaw Mountain High School, but that is just one part of her role.

“I’m like a life coach to these girls!” she said, adding that she spends five or six days each week mentoring her players, who, she said, “spend a major part of their lives here on campus.”

She spends as much time as she can teaching them how to manage life and relationships and challenging their character. She has been coaching softball for more than 30 years and explained that initially, she got into it for herself. She started coaching for the love of a sport she grew up playing.

What it brought her as she matured, though, was an ability to invest in others more than herself. She was able to grow a love for the relationships she developed with her players and to mentor them in the lessons life had already taught her.

She said, “My mantra and my passion are: ‘You get more than just softball here.’ You get leadership training, character building, and complete greatness.”

Sharon tells her team, “You’re only going to be as good at softball as you are a person.”

She spends her time instilling that idea in as many ways as possible.

She said, “It’s about the journey with these girls – the big picture. I get to walk with them as a student and an athlete for nine months, watch them graduate and go out into the world, and the best part is still being a part of their lives out there.”

Sports have been part of Jill Blasczyk’s life for as long as she can remember. Now the head volleyball coach at Embry Riddle Aeronautical University, she played t-ball when she was about six, and from there played softball, basketball, and volleyball, and was also a runner.

She recalled a pivotal moment in her life when she was cut from the seventh-grade volleyball team: “I remember learning that being an ‘athlete’ didn’t translate to every sport.”

She took the experience to heart, trained hard, and at tryouts in eighth grade, she made the team. Her dedication and love of sports carried her through high school and into college. She played four years of college volleyball, and called it, “the best experience of my life!”

She played professionally for a time in Puerto Rico. Later, Jill began coaching at the high school level and found she was able to translate her love of the sport into a mentorship with her student-athletes.

“I started to see younger versions of myself in the girls and connect with them and support them in ways I had received or wish I had received,” she said.

From her position as a high school coach, Jill was offered a position coaching at Embry Riddle—and she happily accepted the unique opportunity.

“There is a unique experience happening for women at Embry Riddle,” she explained, adding, “They are trying to enter fairly male-dominated fields.”

The experience these young women have in volleyball improves their ability to embrace their competitive nature, to embrace that they are multifaceted, inspirational women, with an amazing intellect that drives them to become leaders in the fields they enter, Jill said.

“I show up because these particular student-athletes have captivated me, and I can learn from them as much as they do from me,” Jill said of her team. “I definitely get the athlete part of coaching, but at Riddle, I get a new appreciation for the people part.”

While women’s wrestling is a relatively new sport at schools, Darelyn Rock said “it’s something these girls absolutely needed.”

The head coach of Chino Valley High School’s women’s wrestling team said that wrestling has always been familiar to her. Her brothers wrestled, and coincidentally—“or, maybe not,” she jokes—she ended up marrying a man as devoted to wrestling as her family was.

Her husband is also a wrestling coach—at Embry Riddle Aeronautical University. Her knowledge of the sport and her familiarity with the wrestling world has enabled her to bring this formerly male-dominated sport to girls.

“Women’s wrestling has continued to emerge and is now sanctioned,” she said.

“I feel like I am also a life coach,” Darelyn said, laughing. She gets to encourage self-management skills and teach her athletes how to self-regulate and problem solve.

“I also get to remind the girls that it is about the hard work they put in, the effort they show. This isn’t an area of instant gratification like they’re used to everywhere else, so I get to teach them perseverance too!” Darelyn said.

She said the hardest part of coaching for her is watching girls make poor choices that will negatively impact their success on and off the mat.

“I’ve had to pull girls from the competition as a result of poor sportsmanship.  That’s number one for me and I needed to follow through with consequences as a teaching tool for negative attitudes and behaviors, and that is so hard because the girls work so hard, but they have to learn to channel their negativity in constructive ways.”

She teaches them just that, and how to have fun along the way.

Darelyn said, “It’s more than just winning. Coupled with their work on the mat, seeing their growth and change in life is what it’s about for me. We get to learn together how to do better than yesterday, and we do.”

Erika can’t remember a time she wasn’t in sports. She played t-ball when she was young, and then basketball, softball, baseball, and volleyball in middle school. In high school, she played volleyball, golf, softball, and basketball, but her love of softball rang truest. It landed her a scholarship to Miami Dade College (MDC) where her team won a National Championship in 2010 (she was MVP of that tournament). In two years at MDC, Erika compiled a 47-8 record, receiving All-America accolades, ending with a season in which she earned six conferences, regional, and national awards.

From there she moved to West Virginia to attend and play at Marshall University. She went on to earn her master’s degree in business administration at Lake Erie College—and that’s where her coaching career begins.

The business world never had a huge draw for Erika. She knew from the time she was 12 years old that she was going to be a coach. When she was young, her coach instilled in her the love of the game and respectively a love for her athletes, which inspired Erika to become a coach herself.

Over the years she has coached at several colleges including Dodge City Kansas, Florida Gulf Coast University, and the University of Texas at El Paso. Her experience in Texas was one that she taught her a multitude of lessons, mainly listening to her own intuition and instinct, and as she was presented the opportunity to move yet again, and coach in a new place, she would lean on that instinct as she made her decision.

“I remember driving home through the mountains, and I hadn’t even gotten five hours away and I just knew I the job was right.”

She had played against the Yavapai team in the past and knew it had an upstanding reputation. Plus, she felt it would be a breath of fresh air from her experience in Texas (both literally and figuratively). Erika has now been with the Yavapai College Softball Team for three years and has found a deep respect for the relationships she has built with the girls she coaches.

She is able to pass on what her coach taught her back when she was twelve, and every coach she’s known since, and instill a love for the game and a love for one another amongst the girls.

Erika said, “I love teaching them to just be good people.”

These women spend a considerable amount of time getting to know, and growing relationships with their student-athletes. To say their time with them is meaningful would be an understatement to the coaches. They’d call it a journey, reminding anyone who needs to hear it that it isn’t about the win, but about the way the team reaches the win. The skills they teach the girls on their teams will follow them off the field and the court and out into the real world, and the time spent instilling these values seems to be what the coaches have fallen in love with.