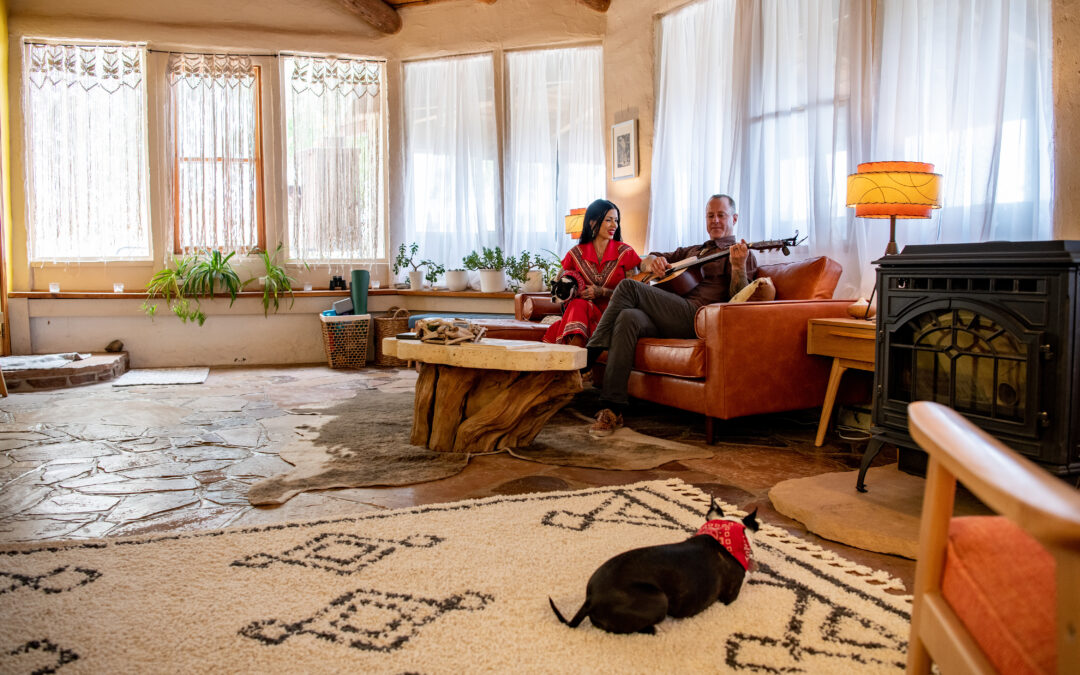 Kat Richards and Trevor Jurgens have poured as much creativity into making their house a home as they do into their other endeavors. As a result, their ranch-style property in Prescott Valley showcases an eclectic blend of old and new, color and texture, while also reflecting their values, interests, and personalities.

Before they moved here from Minneapolis, Kat said she “lived right in the city, right on the bus line in the middle of the arts district.”

It was the perfect place for Kat, a tattoo artist, to build her career.

Then she visited Jerome and fell in love. She and Trevor decided they’d move to Arizona. At first, they looked for a home in Jerome, but couldn’t find one with the features they expected, based on their experience with houses in the Midwest: a garage, a basement, a yard.

Concerned with the environment, though, they were drawn to environmentally-friendly architecture. So it was only fitting that their first Arizona home was a rented earthship in Dewey, made of rammed earth, powered by solar and wind, and built into the ground.

When that home went up for sale four years ago, Kat and Trevor found their next adventure: an 1800-square-foot home on 10 acres in Prescott Valley. It had solar and wind power, a very generous yard, and a garden plot already built.

Still, Kat said, when they bought it, “it was a sad disaster.”

Which, ultimately, made it the perfect canvas for this artistic pair. Kat is a tattoo artist who also draws and paints, both for her own fulfillment and as an additional income stream (she has paintings in gallery shows across the country and sells her creations online). She also does graphic design work on commission and “dabbles in the stand-up bass.” Trevor is a singer/songwriter and guitar player.

They spent the next three years making repairs and fixing mechanical issues and have since infused it with their creativity.

Now, finally, Kat said, “We’re starting to actually enjoy the home for what it is.”

What it is, exactly, is difficult to summarize in just a few words.

The Richards-Jurgens residence is a celebration of the things Kat and Trevor enjoy—music, art, color, and the outdoors. In Kat’s office, a platter of colorful, sparkling, textured rocks sits on a table.

It’s also home to a flock of chickens, two Boston terriers, an adopted, 40-year-old desert tortoise, a hive of honey bees, and a family of barn cats. The dogs, Ruby Tuesday and Runaround Sue, are named after characters in songs (Rolling Stones and Dion DiMucci, respectively), and the cats are named after other famous musicians (Stevie Nicks, for example).

It’s filled with things they’ve found, both natural and human-made.

Kat, who studied anthropology and archaeology for a while before returning to her artistic roots, said finding interesting rocks and animal bones on hikes and other outdoor adventures is synonymous with treasure hunting. She’s found two cow skulls, one of which she carried for miles to get back to the car.

Vintage pieces play roles for which they were designed (couches and cabinets) and new roles, too—a set of wooden boxes makes a perfect bookshelf in the master bedroom.

There are things Kat and Trevor have made or grown, too: a lamp out of one of those cow skulls, a pond, a large garden (which produces enough that their Cactus Dancer Ranch will have a booth at the Prescott Farmer’s Market this summer), and lots of lush houseplants.

Texture and eye-catching patterns make even the earth-tone furnishings interesting, while vivid paint and accent pieces—from bright yellow to tangerine orange to turquoise—make a statement with color.

“It’s almost my social commentary,” Kat said of the color, explaining that most modern homes comprise whites and beiges, and she wanted something bright and unique.

Bright and unique have been part of Kat’s vernacular since she was a child. She said she’s been holding a paint brush for as long as she can remember; her dad was an artist, but her parents constantly sent and reinforced the message that art was a hobby—not a way to make a living.

She went to college as a journalism major.

“I took a lot of art classes, and not very many journalism classes,” she said.

For a time, she worked at a record store and a restaurant while going to school. One day, her best friend said her boyfriend could get Kat a job at the tattoo parlor where he worked. It would mean she could work just one job, right in town, while she finished up school. She took it.

“I certainly didn’t think of it as a career path at the time,” she said.

Then one day, someone saw one of her drawings and told her, “Wow, you should tattoo.”

Kat said that was her moment of clarity. She began apprenticing a short time later, and this past May marked 18 years since she became a professional tattoo artist (with 21 years in the industry).

Now, she’s a full-time artist, whose work allows her the unique opportunity to create art people wear forever, and to make lifelong friends with her clients.

She spends about three days per week at Golden Rule Tattoo in Phoenix and returns to Minneapolis every other month to work with her long-time clients. She works by appointment at the Jerome Tattoo Company.

Connect with Kat, also known as Miss Kitty: smisskittytattoos@gmail.com, www.misskittytattoo.com, on Instagram at @MISSKITTYTATTOO, on Twitter at @kat_misskitty, on Facebook at Miss Kitty’s World of Wonder, or on Etsy at https://www.etsy.com/shop/MissKittyTattoos.

Kat and Trevor will sell their produce at the Prescott Farmer’s Market this summer. To learn more about that, follow @cactus_dancer_ranch on Instagram.