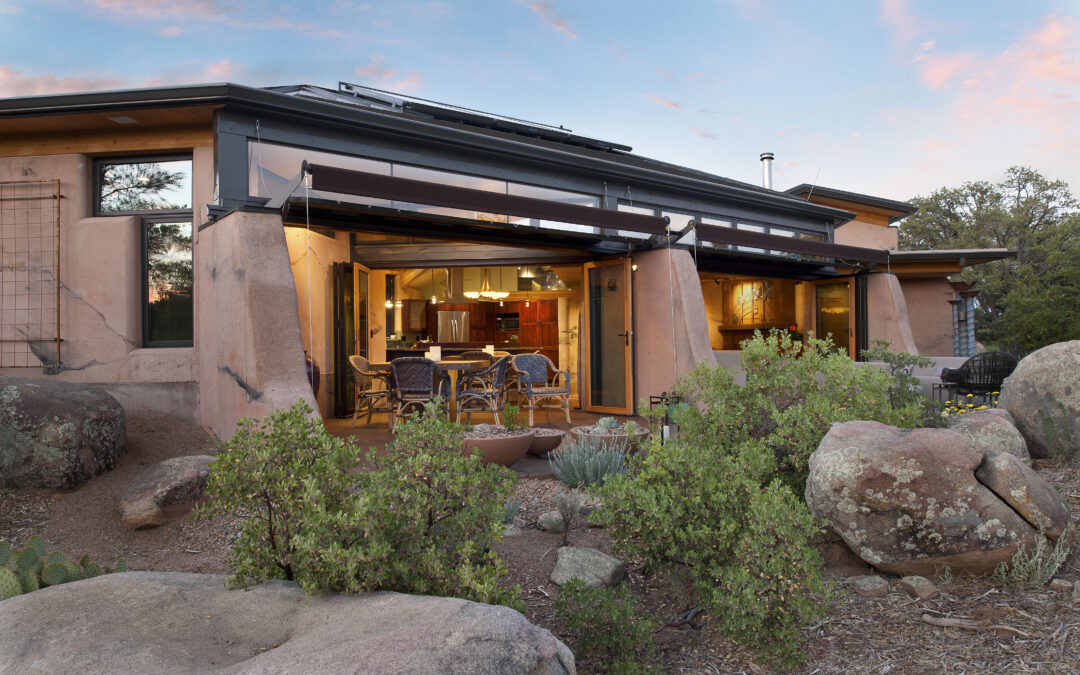 This energy-efficient home is a celebration of nature, year-round

To Suzanne Teachey and Steve Tidwell, their Prescott home is just about perfect.

Literally built into the landscape, nestled in amongst the boulders and trees, the 2,400-square-foot, passive solar home blurs the transition between inside and outside, and is always “perfectly comfortable.”

Since he was a teenager, Steve has dreamed of designing and building a passive solar home. Suzanne is passionate about taking care of the planet, and her interest in designing a smaller-footprint house is through the lens of sustainability and environmental protection.

The two of them met in Seattle, where, Steve said, “you can go months at a time and never have enough light.”

“The best light in our house was in the laundry room and the smallest bedroom,” Suzanne said.

Six years ago, Steve and Suzanne moved to Prescott, where the climate is perfect for a passive solar home. They found their lot, atop a hill on the west side of Prescott, with views of Thumb Butte and the Prescott National Forest. They hired Prescott architect and builder Michael Frerking to help them design the perfect home.

In this case, “perfect” includes passive solar and energy efficiency, along with a seamless transition between indoors and outdoors.

Steve worked with Michael using a sundial mounted on a model of the home to visualize how the sun would shine in the house at any time of day during any time of the year.

“This house is totally oriented around the sun,” Steve said.

During the winter months, the role of the generous south-facing glass doors in the main living area is to collect the heat during the daylight hours. The poured earth walls capture and store the heat just like a battery stores electrical energy (roll-down shades allow Suzanne and Steve to adjust the amount of light and heat they get at certain times of year, and a permanent diffuse reflector inside the windows bounces light into the kitchen and the ceiling to soften the natural light).

During the summer months, Suzanne and Steve open the clerestory windows at night to ventilate the floor and walls and store the cool air, keeping the house cool throughout the day.

The walls are 16 inches thick: four inches of foam make up the core, and poured earth (a mixture of concrete, soil from the site, and oxides for visual interest) makes up the outer layer.

In addition to passive solar, the home incorporates solar panels (which make more electricity each year than Suzanne and Steve use) and hot water panels, which circulate and heat water, powering the radiant heating system in the floor.

The house also features innovative night-sky radiative cooling. Through a system of tubes under the metal roof, water is cooled by radiating the heat to the night sky (which can be as much as 30 degrees colder than the outside air temperature). The cool water is then circulated through the in-floor radiant heating system to cool the house during the summer.

Also, a rain-collection system harvests rainwater and can store as many as 18,000 gallons of potable water in tanks under the garage.

The windows are triple-pane, the lights are LED, and there is insulation in the ceiling and underneath the slab (as well as in the walls).

Because the house is so well sealed, Suzanne and Steve had heat recovery ventilators installed to maintain the home’s internal temperature while letting in fresh air.

Blurring the Transition Between Indoors and Outdoors

Both Suzanne and Steve enjoy nature, so it only made sense that their home would feel like part of it.

“When we started the house, we didn’t build a pad,” Steve said. “We very carefully disturbed only the building footprint.”

“We wanted to save as much of the natural vegetation as possible,” Suzanne said.

They wanted to save it, and they also wanted to enjoy it.

“The basic concept,” Steve said, “is that there’s a very blurred transition between the inside and the outside. It’s built on-grade so you can walk right into the landscape.”

Although they consider the house “small,” they included several patios for outdoor living, almost doubling their living space.

In fact, the south-facing wall, which is almost all glass doors, opens completely to allow for a seamless indoor-outdoor experience between the living room and a patio. The north side of the house boasts another seating area, protected from the elements.

From there, a spiral staircase (which is on poles so it’s almost see-through) leads to a rooftop deck where Suzanne and Steve enjoy 360-degree views of Prescott—and the sky.

“We can come up here and see the stars, the storms, and the sunsets,” Steve said.

The furniture on the deck swivels, so they can choose the best view at the moment and take it in.

Color, Texture, Form: Bringing the Outside In

Suzanne explained that they worked to bring many of the colors and textures from the outdoors, inside.

The color they chose for the poured earth walls matches the granite boulders and that of the cement flooring and also mimics the landscape. The kitchen bar and many of the walls are curved, echoing nature. In the yoga studio and the master bedroom, copper-lined portal windows let in extra light, adding a natural glow.

Because Steve and Suzanne knew they would not be able to agree on a style as they furnished their new home—Suzanne’s tastes are more eclectic while Steve’s are more traditional—they hired interior designer Capella Kincheloe out of Phoenix.

“She also owned the concept of indoor/outdoor,” Suzanne said.

The couches in the living room and on the patio feature the same fabric, and the dining room and patio feature matching sets of furniture (which can be joined to make a bigger table if Suzanne and Steve have company).

With “a sense of history and travel,” Capella helped Suzanne and Steve furnish their home in a way that it would feel comfortable to live in—not just beautiful to look at. From muted-but-colorful rugs to antique chests and modern furniture, the furnishings are eclectic and traditional, matching both Suzanne and Steve’s styles.

Steve and local artist Royce Carlson designed a rusted metal corner unit with bi-fold doors to house the TV and the wood stove in the living area.

“That was really meant to be an artistic piece,” Suzanne said, and Steve mentioned they included these artistic elements wherever possible.

Steve built several tables and a rocking chair, and made several ceramic pieces that are on display throughout the house.

The Beauty is in the Details

Thoughtful details add interest in every area, inside and out.

An indoor river-rock fountain adds humidity and the soothing sound of running water. The rain harvesting system is a set of sculptures—“bowls” of different sizes and in varying heights. The house makes a straight line from the living room to the front door, creating flow. In Steve’s woodshop, two doors open so he has a view and a breeze. The staircase leading up to the rooftop deck features “wiggly pickets” for interest.

The walls feature natural-looking color and texture, thanks to the poured-earth process that includes adding oxides to the soil and cement and pouring the mixture into forms.

“Until you take the forms off, you don’t know what you’re going to get,” Suzanne said.

It All Adds Up to Perfection

From the walls to the furnishings, the energy efficiency to the blurred lines between the inside and the outside, what they got was perfect.

Suzanne is an herbalist and the owner of Nectar Apothecary, a traditional herbal apothecary, in Prescott and Steve is a retired optical scientist.

They married six years ago, at the perfect location: their newly-built home. 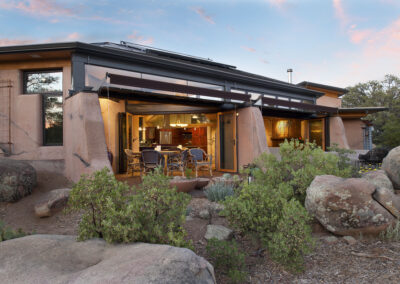 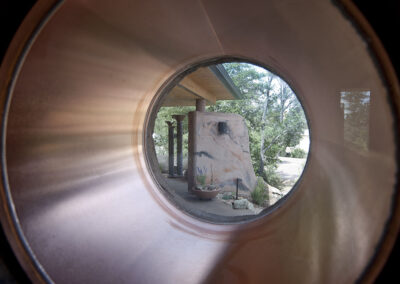 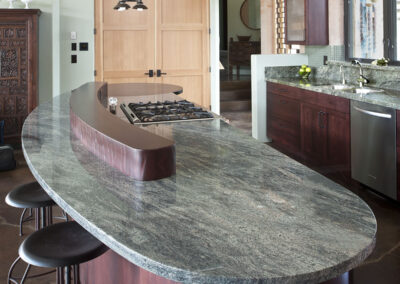 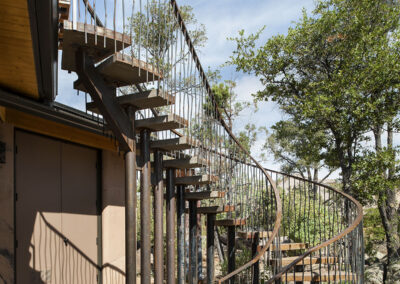 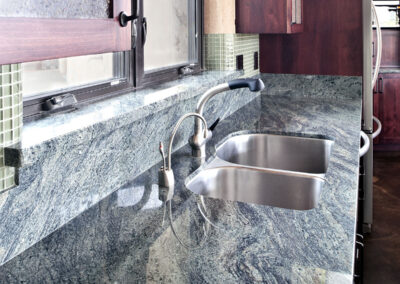 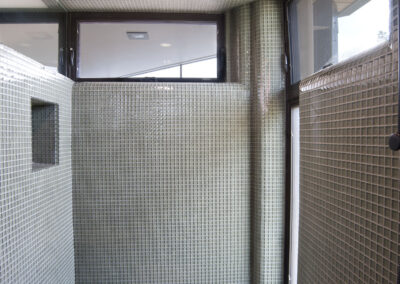 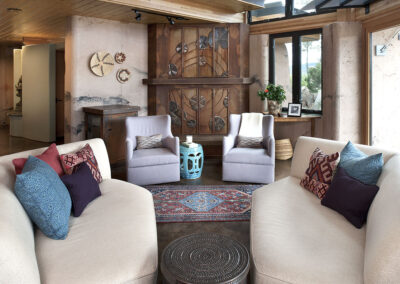 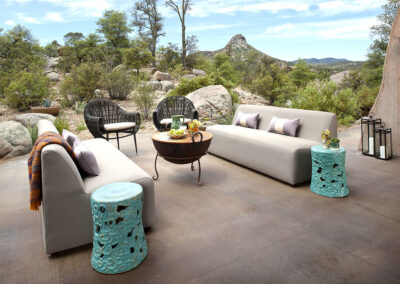 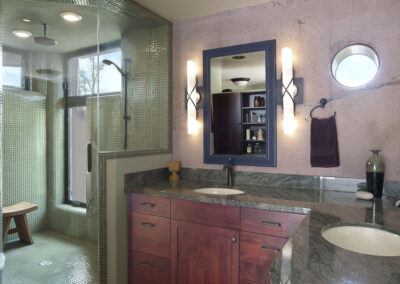 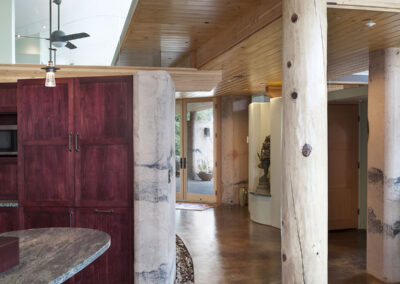 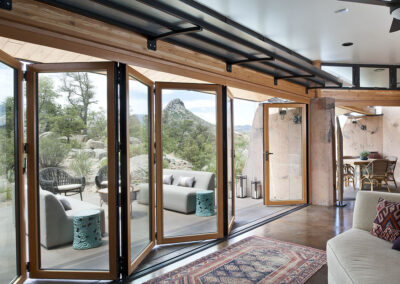 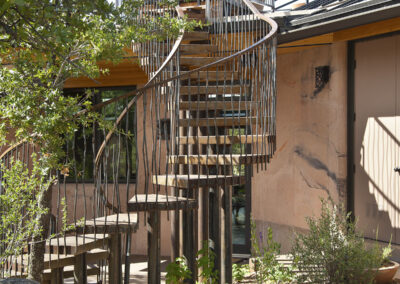 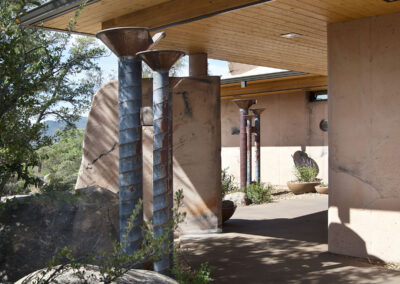 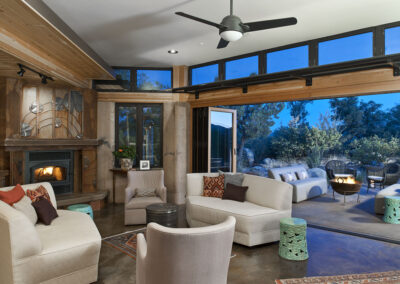 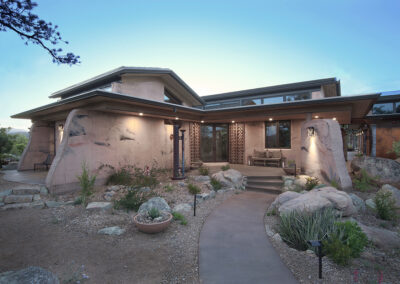 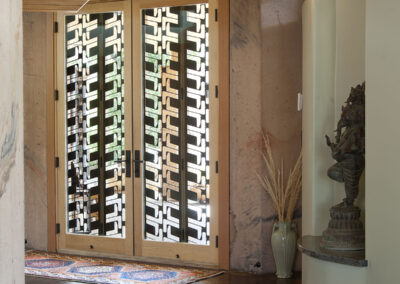 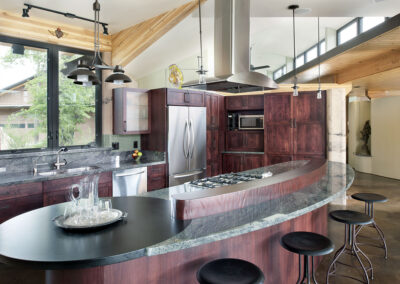