For the Love of Running 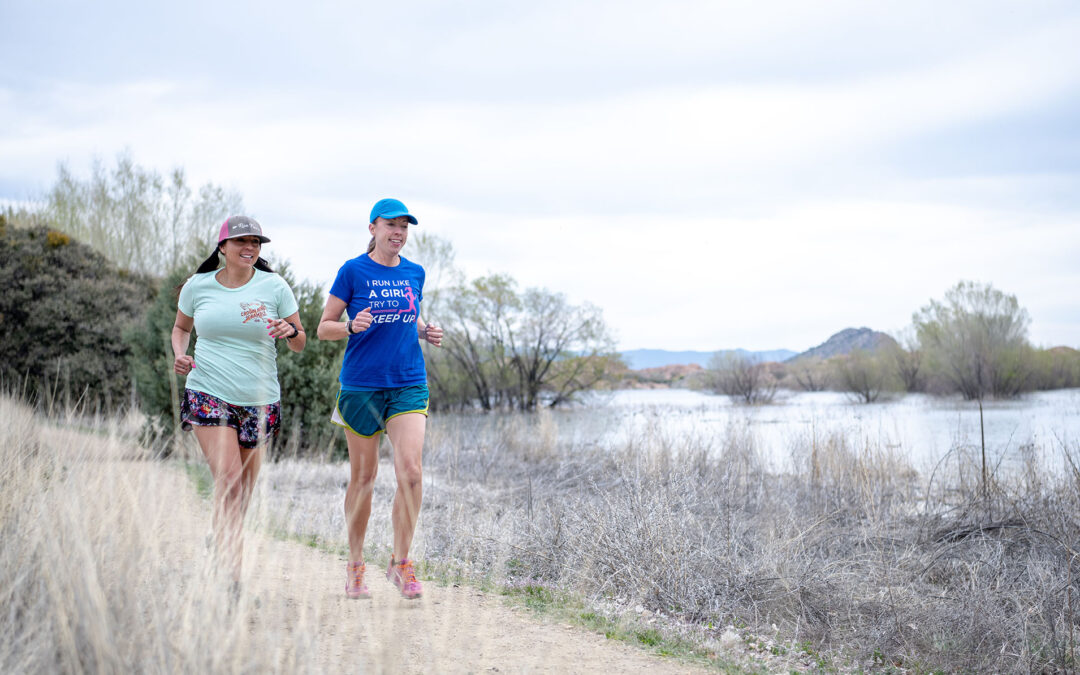 Local runners share their favorite things about hitting the trail

Local runners Cindy Rollins and Jessica Leary have been friends since they met through a local running club in January 2011. They ran a 31-mile steady hill climb, the Crown King Scramble 50K, together this past March, finishing in 8 hours and 37 minutes. Both women recently shared what running means to them and what they’ve learned from it.

For Cindy Rollins, her passion for running has been lifelong.

“I have always enjoyed running,” she said during a recent interview.

When she was a child, Cindy and her family lived in the country, and she remembers getting off her horse and running next to it. In seventh grade, it became an integral part of her life, providing respite when her family was going through tough times. Her science teacher, noticing she was struggling, encouraged her to join the track team.

“Just the freedom of running was so powerful,” Cindy, said, “and I felt so good afterwards. When you’re running, you can’t hide or put walls up. You connect with other people.”

From that moment, she was hooked. She has since been on several running clubs, and now completes running events regularly, including the 50-kilometer Crown King Scramble this past March.

And although she’s tried various other sports, she said, “I always come back to running as my favorite. It feels so good.”

Plus, she said, “Most of my closest friends are runners.”

What running has taught Cindy: self-discipline, delayed gratification, and “so many lessons about life,” many of which she’s applied as she has built her practice as a licensed psychologist.

Cindy and her family live on a small family farm with a vineyard, and they enjoy hiking, backpacking, and camping together … and, of course, running.

It wasn’t until Jessica moved from Seattle to sunny Prescott in 2004 that Jessica Leary realized she loved running —and she hasn’t stopped since.

Her first race, in college: a 10K run with her dad and stepmom in Vancouver, BC.

Now, she’s a master of endurance, having completed distance events ranging from three to almost 47 miles, and directed the well-known Whiskey Row Marathon.

One of her favorite memories is running her first ultra-distance race in Minnesota in 2011. It was a fundraiser for college scholarships, in which sponsors paid runners for every lap they ran. Jessica realized then that she could push herself beyond what she thought was possible—and for a good cause.

“I’ve met some of the most amazing people, lifetime friends,” she said of the sport. “I love how it makes me feel, and I love being outside. I know it’s good for my health, too, but that’s secondary.”

Those friends have influenced Jessica, who works in juvenile probation, to think bigger and do more, she said—and she’s stepped up to the challenge.

What running has taught Jessica:

“I’m always throwing out these cheesy one-liners about how running is analogous to life,” she said, sharing a few: “You have to trust your path, and that you’re going the right way. The view is always worth the climb.”

From Cindy: “The beautiful thing about running is that the vast majority of people can be runners. It’s not defined by pace. Going out there, putting on your shoes, and pushing your body, it changes you. Start slow. Be gentle with yourself. Connect with other people. Find support.”

From Jessica: “Set a goal to complete an event—like a charity 5K—to start. Once you feel that sense of accomplishment, you can train to do more. We are just glad you’re out running with us. It’s not about speed.  Your only competition is within yourself.”