Friendship: The Real Joy of Gardening 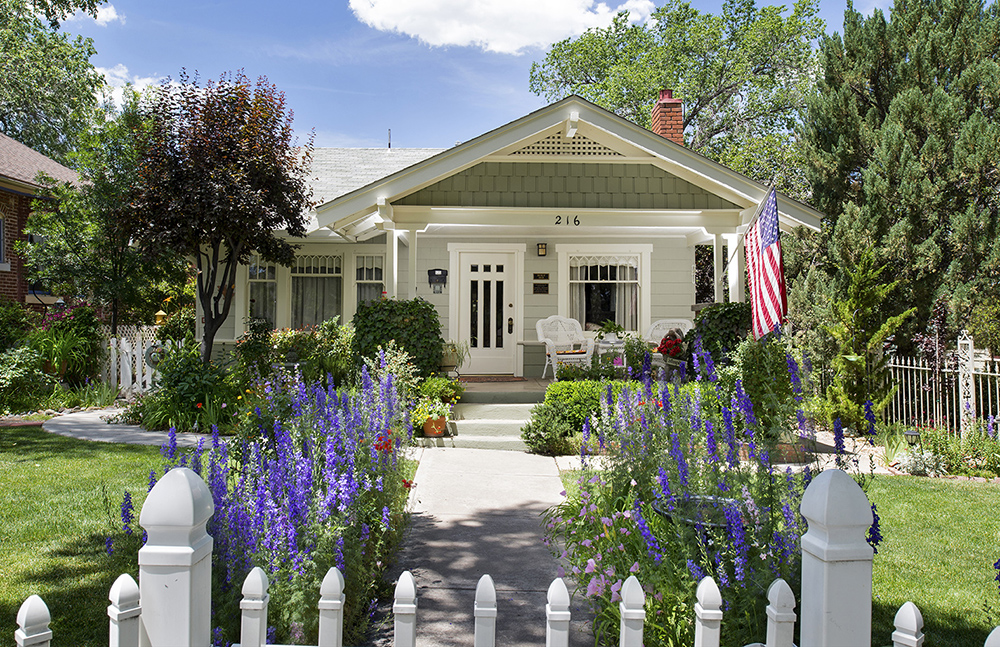 Inside Virginia and Jerry Glasco’s Mount Vernon Avenue home, there are windows that don’t open, doors that squeak, and cracks in the plaster. And the Glascos love every charming detail, because each one is part of the home’s rich history.

“The house is pretty much original,” Virginia said during a recent tour of the 1919 cottage, which is on the National Register of Historic Places.

From the bathroom cabinet to the glass in many of the windows, including the stained glass in the living room, Virginia has always found the details charming, especially in the quaint setting where she and Jerry—high school sweethearts married for 57 years—have settled down to retire … and live simply.

After raising their two sons in Phoenix, the Glascos figured they’d retire to Sedona, where they had a second home.

But then they visited Prescott, and fell in love. One day, Jerry noticed the little green cottage on Mount Vernon Avenue—the one Virginia always admired—was for sale.

They bought it right away, and have spent the past fifteen years there, living life as simply as possible (without watches or computers), and enjoying the “terrific” neighbors and the home’s past.

The family that lived in the house before the Glascos raised five children there, and one day those children—now grown—came to Mount Vernon Avenue to take pictures in front of their childhood home.

Virginia went out to meet them and they told her how they’d carved their names into the stained glass and how their dad had poured a concrete pad in front of the fireplace. Until that moment, Virginia and Jerry had considered cozying the fireplace up a bit—but as soon as they heard the story behind it, they didn’t want to change a thing.

Although the Glascos wanted to keep the home “as traditional and old fashioned,” as possible, they set to work on the garden right away. Now, it’s a showstopper, a conversation starter, and a place for friendships to grow and thrive right alongside the flora.

“When we first moved here,” Virginia said, “there was a barbed wire fence, a metal shed that was half-falling down, and dead grass.”

The front yard was all dirt.

When they lived in Phoenix, Virginia kept a lush, vibrant garden, which earned spots on garden tours. So it seemed natural to create a garden at the new house, too.

Jerry amended the soil, and they brought up some of the plants from their Phoenix home—the peace rose her mother gave her, and lots of bulbs.

“It was fun to see what would and wouldn’t grow,” Virginia said.

As Virginia worked her garden and nurtured friendships with her neighbors, those two elements of her life became intertwined.

The garden is now a place, she said, where she trades stories and flowers. She and her friends trade bulbs and cuttings as well as gardening advice.

“My bulbs and seeds are all over the neighborhood,” she said. “In the summer, our front porch is like another room. We talk over the fences, and invite our friends for some lemonade or a glass of wine.”

With its brick-lined walkways and rock-lined flowerbeds, the garden wakes up in spring with a wide variety of bulbs like tulips, daffodils, irises, and crocus, as well as bridal veil spirea. Summer brings peonies, pansies, and viola. The list of flowers goes on: poppies, larkspur, lilies, and dusty miller.

In general, Virginia said, “I let Mother Nature do her job,” in terms of letting the plants go to seed and scatter throughout the garden.

Wood violets (from a friend in Arkansas), mint, and mountain (or creeping) phlox have homes in several different places, as do forget-me-nots from a friend down the street.

A friend from Greer gave the Glascos a spruce tree, and it thrives in the garden’s front corner.

“We call them pass-along plants,” Virginia said. “We all share and pass them along.”

Then, she said, whenever she sees a plant given to her by a friend, she thinks of that person.

Virginia is passing her love of gardening on to her great-granddaughters, Penelope, nine, and January, seven, as well. They planted a small vegetable patch in honor of Virginia’s mother.

All of it—the digging, amending, planting, watering, feeding—is hard work, but when people walk by in the summers and comment on Virginia’s garden, she said, that’s the real payoff.

“The real joy of gardening,” Virginia said, “is that you get to see all these beautiful colors, and you get to share it with other people.”