From Vision to Reality 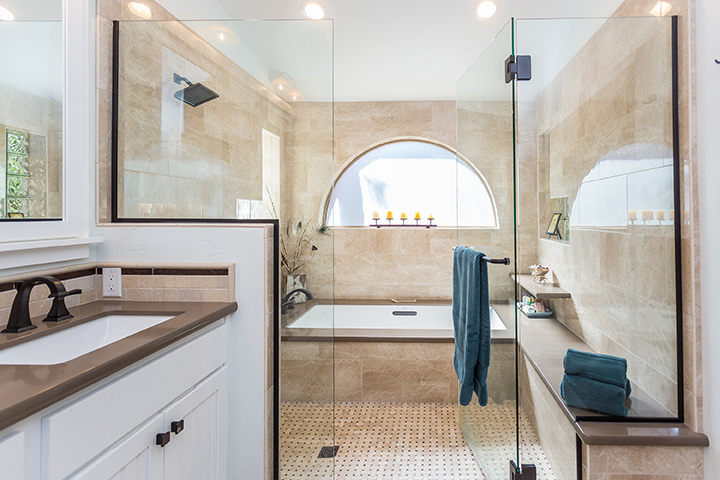 A good design is about more than aesthetics. It’s about space and cohesion, function and detail. In each of the following bathroom design projects, Certified Kitchen and Bath Designer Christie Board, of Board by Board Design, brought these elements together.

The finished projects (four remodels and one new build) are pleasing to the eye, whether they’re colorful or soothing, rustic or modern. They’re also prime examples of maximizing space, and ensuring one room in a home flows into the next.

While they provide the necessities, they do so through thoughtful details. With a focus on Aging in Place, Christie strives to include accessibility features wherever possible. And with a focus on smart design, she thinks ahead, offering solutions like hidden electrical outlets, pull out trashcans, and extra storage space.

It’s all about the vision.

Project One:
From a Plain Bathroom
to Spa Experience

Although this bathroom featured a show-stopping sunken tub, it didn’t include an actual shower; the homeowners had to stand in the tub and use a hand shower, or use a different bathroom all together in order to shower.

It was important for the client to retain a bathtub, Christie said, and she asked for a real shower and an aesthetic upgrade. Also, because the bathroom opens to the bedroom, the client was concerned about being cold in such a wide-open space.

By removing the sunken tub, Christie was able to redesign the bathing space. It became a “wet room,” separated from the main space by a wall-to-wall glass panel (with a door). The new spa tub is six feet long and jetted, and there is now an actual curb-less shower. A bench runs the length of the wet room, providing a space for the homeowners to sit down if they ever need to.

The tub and the floor are heated, which, Christie said, makes the wet room (and the entire bathroom) a “cozy space.” The Board by Board team removed the stained-glass applique from the main window, and because the home’s exterior is brick, they covered part of the glass-block window so it better aligned with the new bathtub and shower.

The main space also got some major sprucing up, with custom medicine cabinets, built-in shelving, new hardware and sinks, and a fresh coat of paint.

“It turned out really pretty,” Christie said. “We found some good solutions, including a deep soaking tub and a warm shower, and we made sure this space was cohesive with the rest of the home.”

Project Two:
From ‘Extremely Dated’ and Crowded to Spacious, Sparkly and Rustic

This cozy bathroom featured a huge garden tub, a single vanity, and a lack of privacy … all of which combined to create constant conflict for space. The massive glass block window over the garden tub was a recipe for mold and dry rot, Christie said.

The archway between the bedroom and the bathroom was so narrow that when someone opened the door, it would hit the archway.

It was also “extremely dated,” Christie said, so in addition to the homeowners wanting to improve the use of the space, they also wanted something pretty.

“This was the best grab of space,” Christie said, explaining that the Board by Board team took two feet of space from an adjacent closet to expand the bathroom and make a better use of the space. “That changed everything.”

“It’s a crime to have bathroom windows that don’t open when we live in such a nice climate,” Christie said.

Next, they added a double vanity plus a separate make-up vanity for the wife, and added a pocket door to the toilet room for privacy.

To solve the door-archway conflict, Board by Board installed a sliding barn door at the entrance to the bedroom.

While the bathroom’s shower tile and heated floors are calming neutral colors, the tile backsplash is sparkly and colorful like the floral print on the wall.

“I’m very happy with how this turned out,” Christie said. “The additional square footage took this bathroom from okay to great, and I love the contrast of sparkly and rustic.”

She said it’s fun to work with a client brave enough to have fun with color, and she likes the challenge of balancing that with ensuring every space in the house flows into the next.

Project Three:
From Super-Busy to Calm and Functional

The most obvious challenge here was that the bathroom had been tiled exclusively in what Christie called a “super-busy” marble.  “It had to go,” she said.

“It wasn’t a great use of space,” Christie added. The split vanities hogged space, and an oversized tub eclipsed the shower.

Plus, the accesses into the bathroom and into the toilet space were “very narrow,” and would become problematic if either of the homeowners ever experienced mobility issues.

Step one: “Get that marble out of there,” Christie said.

The Board by Board team replaced the marble finishes with calming colors and created more space by installing a long, two-sink vanity.

This enabled them to widen the entry way from the bedroom to the bathroom, and into the toilet space (the toilet is now tucked behind a wall, which offers some privacy. It also allowed them to put in a tall linen cabinet for additional storage.

They installed a freestanding bathtub and a separate, spacious walk-in shower with benches and double showerheads. The makeup table, which the client wanted to keep, sits at the end of the bathtub, and the rustic wood cabinetry meshes with that in the rest of the house.

“We accomplished everything the client wanted,” Christie said. “We provided  permanent access by opening the entry, and we updated the bathroom and calmed

Project Four:
From Unimaginative to Personality Plus

This project features a bathroom and a powder room in what Christie called “a very cool, Santa Fe house.” The homeowner was ready for an update; she wanted these rooms to reflect the personality evident throughout the home.

The master bathroom featured a large sunken tub, separate from the shower, and the homeowner wanted it gone.

The powder room featured a typical pedestal sink … and not much personality.

In redesigning the master bathroom and powder room, Christie said, “I wanted everything to look old, like we’d dragged it out of someone’s barn.”

The client didn’t want to touch the windows on both walls above the bathtub, so a solution was needed to figure out what to do with the space we’d just vacated. A long bench with built-in storage was the solution.

A new vanity with a storage tower (which incorporated outlets for charging toothbrushes), and rustic mirrors above each sink.

The shower was redesigned to include a bench. Christie used painted vintage-look tiles to create area rugs on the floor and as accents inside the shower.

Christie replaced the powder room’s pedestal sink with a custom vanity with a vessel sink, which “brought everything into scale and gave it personality.”

“This is such an amazing home,” Christie said. “There is so much architectural detail.”

This project was a matter of adding personality without overdoing it.

She said they succeeded by adding interest and Spanish flavor to the bathrooms to make them perfect for the house.

This was a new build, so the Board by Board team didn’t have to renovate; they were able to put pencil to paper and come up with exactly what their clients wanted.

She began working with the homeowners in the design phase, while the plans were being drawn. Christie said that’s “one of the smartest things you can do,” because there’s a science to designing bathrooms and kitchen for form and function.

The rest of the house blends rustic and clean, open and bright, so Christie carried those themes over into the bathroom project.

This bathroom features a heated floor, a free-standing tub and a spacious walk-in shower with two showerheads, two benches, and a niche that runs from one end of the shower to another.

Christie used calming earth tones throughout. She added careful details, like mosaic tile in the shower and an orb chandelier.

The double vanity features a tower for storage, and the cabinets are rustic, with a vinegar stain and granite countertops.

“It’s big and it’s just beautiful,” Christie said. She added that the most valuable part of this project was that the homeowners worked with designers throughout the planning phase. A designer is an expert in creating and implementing a cohesive vision, Christie said, and that’s why this particular home flows so well.

While Christie said there is a science to designing spaces that are equal parts form and function, it takes a special eye to deliver the “wow” factor.