Get your Spooks in Jerome 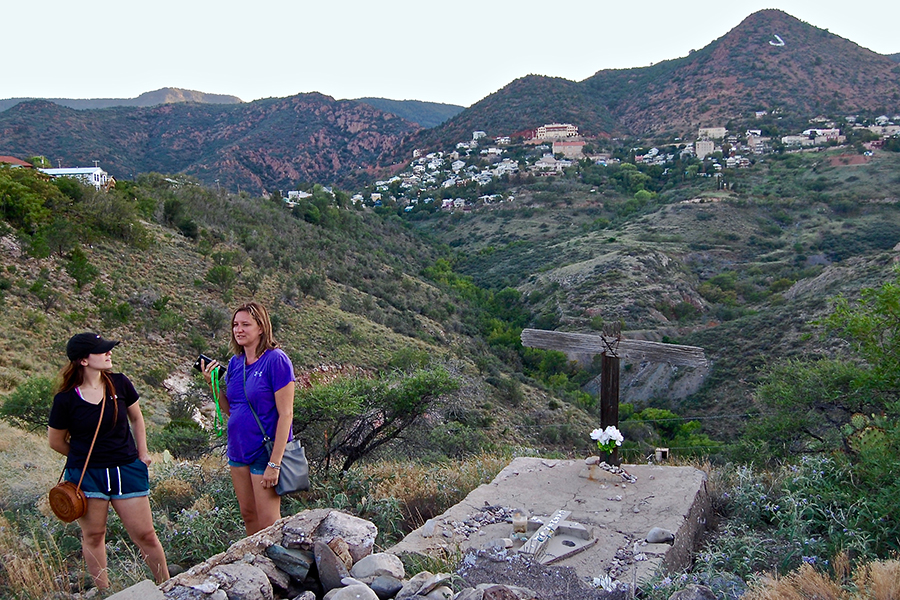 There’s no better way to get into the Halloween spirit than a spooky tour, and there’s no better place to do it than Jerome, where century-old buildings echo with Old West spirits.

Labeled the “Wickedest Town in the West” by a New York newspaper back in 1903 during its copper mining heyday of 15,000 residents, Jerome almost became a bona fide ghost town in the 1950s after its copper mines shut down. But the four dozen remaining residents formed the Jerome Historical Society to save their community with a National Historic Landmark designation. Jerome now revels in its ghost town image with names such as “Spook Hall” for its community center, the Spirit Room bar and the Haunted Hamburger restaurant, dragging itself back to life with visitors instead of copper. It’s been a screaming success.

“I know Jerome is known to be haunted, so I had to come on a tour,” related Kylie Schofield of Tucson on a recent tour. She said she relishes all things spooky and limits her TV viewing to Ghost Adventures (which of course has featured Jerome).

Two ghost tours operate all year in Jerome: Ghost Town Tours and Tours of Jerome. Walking tours take visitors on strolls through the historic business district as guides relate tales of debauchery and death from the halcyon mining days. Van tours venture farther away to sites such as the historic cemetery and dilapidated portions of the cavernous former high school.

Before cutting tour participants loose to explore multiple rooms in the high school recently, Ghost Town Tours guide Dave Villescas described previous encounters on the high school auditorium stage with a spirit named Anna who loves to dance. Tour participants Daniel Rourke and Rosa Martin of Flagstaff said they decided to try to connect with the ghost by dancing near the stage, then heard a man’s voice whisper “Anna.”

Both tours also supply various ghost hunting tools such as EMF (electromagnetic field) and EVP (electronic voice phenomena) meters. Young Lex Leslie of Casa Grande said she was getting lots of activity on her EMF meter during her first-ever ghost tour with Tours of Jerome.

“One ghost wanted to be friends with me,” she said, relating that she heard a female voice in the Connor Hotel Room #4.

The town’s historic cemetery is among the eeriest Ghost Town Tour stops.

“You guys came to talk to the dead, and here’s your opportunity,” Villescas announced. Apparently the opportunity presented itself repeatedly that day, as several people reported hearing EVP voices as they strolled past graves perched on the edge of Cleopatra Hill.

Tours of Jerome guide Jane Goddard brings along dousing rods, perhaps because she hails from a long-time Camp Verde ranching family whose spirits she suspects help guide her.

“I’m kind of old school,” she explained. “I like dousing rods. The same thing you use to pick up water can pick up energy.”

Getting there from Prescott:

Jerome is a 35-mile, hour-long scenic drive away via Highway 89A as it winds over Mingus Mountain.

Getting there is a big part of the fun!

For ghost tour prices and booking:

Tour an 1890-era mine with historic buildings and equipment.

Open 10-5 daily except Thanksgiving and Christmas.