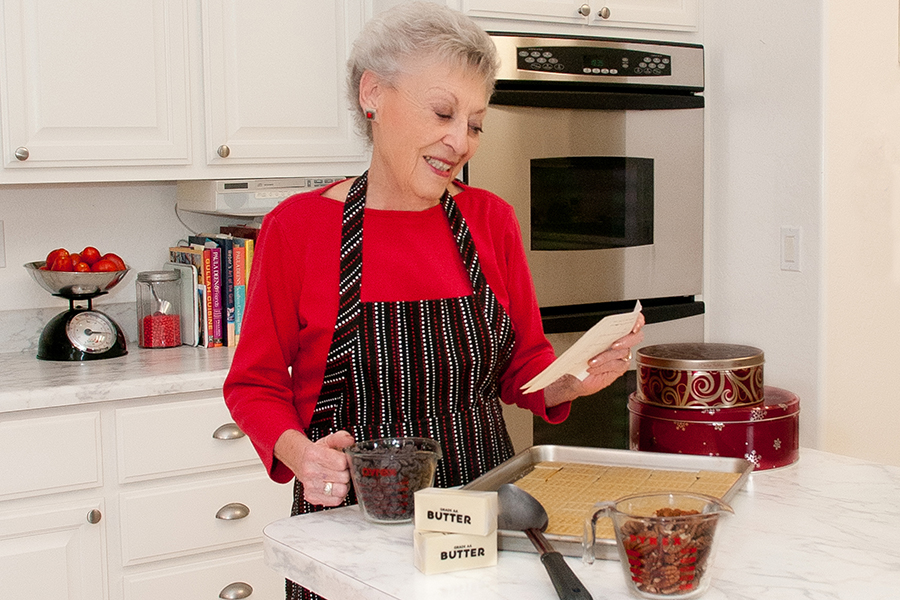 Prescott businesswoman’s history of perseverance and entrepreneurial spirit lead to an exciting life.

By Hilary Dartt • Photos by A Portrait Park by J

usiness ownership is nothing new to Hildy Grover

She’s owned numerous businesses, including two Taco Bell restaurants, a rental car agency and used car sales lot, an employment agency for food and beverage people (which she co-owned with her friend Janice McGlynn), an ice cream store, a bar and restaurant, and a 16-unit apartment building.

It all started when she was nine. Her first venture: selling fingerprints to people walking by her house on their way to work. Everyone else in her family worked at least two jobs—you were considered lazy if you didn’t.  She took the ink stamp pad her father brought home from the depot (he worked for the railroad) and set out to earn some money, too. She charged one penny per finger or ten cents for ten.

Now, 77 years and many businesses later, A portrait Park by J, the business she co-owns with her son and daughter-in-law, Jay and Terilyn Grover, has become a household name locally. Even so, Hildy said, people may not realize the history behind the building, itself. (See “A Building Rich in History,” page 52).

Always on the lookout for diversity and variety, in 2017 they launched My Health Etc, a hemp CBD oil retail boutique shop. The three of them had been experiencing some health problems, and after researching hemp CBD, decided to give it a try. It worked so well, they decided to share their good news with other people who have health issues.

“Photography has blessed us,” Jay said, and Hildy said, “We’ve always made people look good and now we’re making them feel good, too.”

Just like many of Hildy’s other businesses, A Portrait Park by J and My Health Etc are thriving.

“That is no coincidence,” Jay said. “It’s amazing what [Hildy] has accomplished.”

The most important lesson he has learned from his mom, he said, is perseverance.

She bought her first Taco Bell after her husband, due to health issues, was laid off from his job at Motorola. When he came home mid-day, she sent him straight back out to sign up for unemployment. As soon as the door closed behind him, she burst into tears.

Hildy’s father, who was visiting at the time, set the kitchen timer for ten minutes and said, “We have ten minutes to feel sorry for ourselves and then we’ll solve this problem.”

After the ten minutes were up, she called a business broker she found in the newspaper, and said, “I have $5000 to invest in a business, what have you got?”

Along with her father’s help she bought her first Taco Bell the next day.

Tacos weren’t normally on the menu in her home state, Illinois. When she and her family first moved to Scottsdale, and were unpacking their belongings, lunchtime rolled around. They set out to find something quick; they saw a Taco Bell. Never having had a taco, they decided to go on a “lunch adventure.”

Hildy said, “Eating a taco doesn’t necessarily mean you know how to make one or run a Taco Bell restaurant. And, driving a car won’t teach you how to rent or sell a car, either.”

Most businesses, she said, require customer service, honesty, fairness, and liking the people and community you serve (with an emphasis on the word, serve). It also helps the bottom line if you buy low and sell high too.

Hildy’s parents played an important role in her entrepreneurial journey. They always had something going. Her mother raised chickens and sold them and the eggs. Her dad owned a bowling alley and an insurance agency, besides being Depot Agent for the CB&Q Rail Road.

At one point during the depression, when money was dear, Hildy’s brother wanted a trombone, an electric guitar, and a bicycle. So their mother fired up the kerosene stove in the basement and made donuts. Her brother delivered them through snow, ice, heat, and rain. He got to keep the profits and buy the items he wanted.

Jay said Hildy instilled the same entrepreneurial spirit in both her sons. Although his brother, Kevin, has now passed away, he was a chef and owner of several restaurants.

After retiring from starting and operating businesses in the Phoenix area, Hildy decided it was time to get out of the heat. Jay was, at the time, a traveling photographer. They decided to look for a location and start a studio of their own. Hildy said, “I wanted to live where we had our business. When business is slow, I can do the ironing, make soup, and clean the house.”

They found their property at 1515 Thumb Butte Rd in Prescott in 1991 and secured their first school photo contract six months later with Chino Valley High School. At one time, they serviced the photography needs of five schools.

“Business is fun and exciting,” Hildy says, “It is my entertainment, hobby, and recreation, along with cooking.” Jay and Terilyn live on the studio property and Hildy lives just across the street. She helps out with both businesses and when things are slow, she goes home and makes the soup for the three of them.

She said, “We eat together five days a week. That way I make sure they eat well.”