The Meaning of ‘Home’ 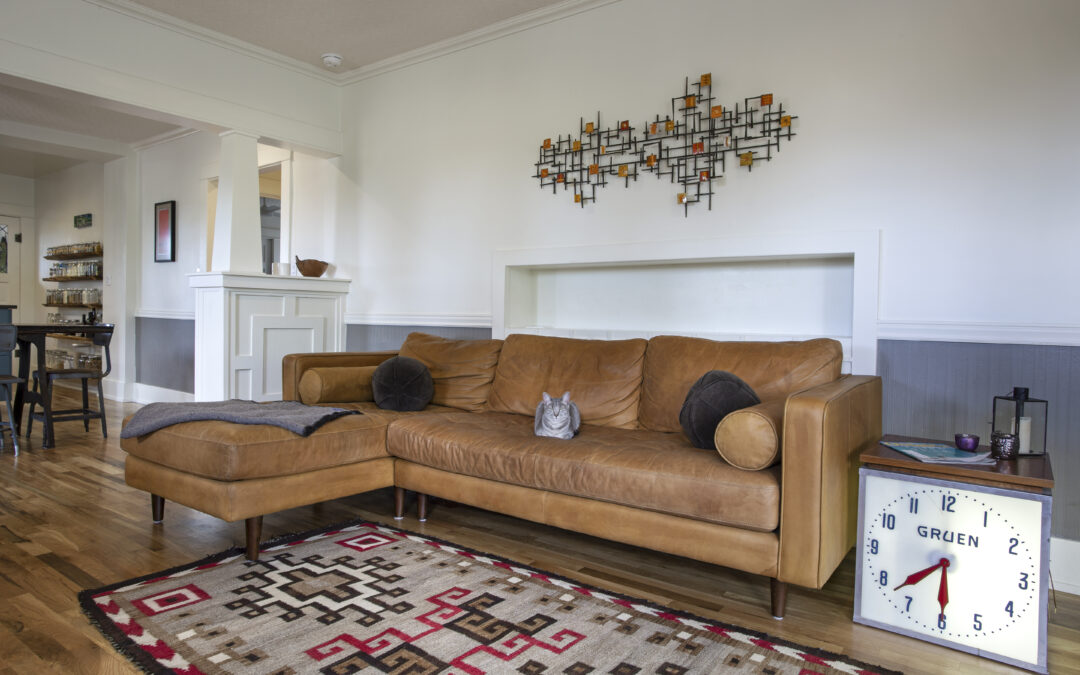 From the outside, the lovely turn-of-the-century Craftsman house set back from the street and up to a set of curved concrete steps that winds through rich garden beds, is the epitome of Prescott’s Park Avenue. Features like cedar shingles and a generous deck make it charming and quaint, while the setting provides treehouse-worthy views of downtown rooftops and P Mountain.

None of that compares to the inside, though, where carefully-curated, thoughtful details come together to create a cozy sense of home.

Tina Rose and her husband Brett Smith bought the 1400-square-foot house in March 2018 and immediately set to work to return the home to its architectural roots while also modernizing and updating it to reflect the way they live.

“We consider ourselves stewards of the house,” Tina said during a recent interview. “We want to respect the intent of the architecture and the community. This is an old home, and it will be here long after we will.”

The house was built in 1910, just one year after its neighbor, Lincoln Elementary School.

And although Tina and Brett had originally planned to build a new house in Mountain Club, they found the cost of new construction “astronomical.”

Just after they decided to sell the property they’d bought, the Park Avenue house came on the market.

But someone else had already made an offer—cash, over asking price. That potential buyer planned to use the house as a rental, while Tina and Brett envisioned it as a long-term home. Along with their offer, they decided to write a letter to the owners, explaining that they’d fallen in love with the house and wanted to make a life there.

The owners—who’d lived there since 1976—accepted Tina and Brett’s offer.

Tina, a writer who considers interior design her jam, and who spent her childhood perusing design magazines with her mom, researched every detail down to the linens.

“We spent a ton of time thinking about what we wanted our house to be,” she said. “’Home’… what does that mean?”

She read the book, “The Little Book of Hygge: Danish Secrets to Happy Living,” by Meik Wiking during the weeks preceding their purchase of the home, and said it had a significant impact on the design choices they made.

In their quest to respect the home’s architectural style, the couple replaced the existing laminate wood flooring with oak hardwood. They installed in antique light fixtures in the kitchen and chose vintage-style tile for the bathrooms (one of which they added because the house had just one bathroom when they bought it).

The tile, Tina said, “reminded us of a trip we took to Istanbul.”

To modernize the space, they removed a large built-in cabinet that split the kitchen from the dining area, and put in new cabinets and quartz countertops, along with a honeycomb-pattern tile backsplash.

To make the house a home, they brought in art and furniture and décor that had meaning to them: paintings and photographs by friends, art they collected during their travels, and furniture Brett made (he’s a Fire Captain with the Williamson Valley-Bagdad Fire Department and he’s also a woodworker).

Brett traded a coffee table he made for the modern metal sculpture that serves as a centerpiece in the living room, and he built the TV stand. One of his favorite poems is “The Red Wheelbarrow” by William Carlos Williams, and for his birthday, Tina bought him a painting of a red wheelbarrow and a few chickens, painted by their friend Linda Whiting.

The dining chairs are antique school chairs, and Brett crafted the table from a large slab of mesquite. The “pantry” shelves along one kitchen wall are slices of a piece of wood Brett had kept for years, hoping to find a use for, and tidy rows of glass jars, filled with spices and other ingredients, line them.

Because Tina and Brett spend so much time in the kitchen—the two of them love to cook—they “got sort of fancy with the stove.”

In the guest bedroom, Tina placed a handmade Guatemalan scarf along the foot of the bed, and in the master bedroom is a dresser the two of them refinished just after they met.

They did as much as they could, themselves, and hired professionals to take care of electric and plumbing upgrades and to install the flooring.

One of the reasons they were so drawn to this house, Tina said, is because it offered space for each of them to pursue their hobbies (the house they lived in before this was only 700 square feet).

Tina enjoys making body lotions, home cleaning products, tinctures, and more and jokes that she takes every class at Nectar Apothecary in Prescott. The room just off the kitchen does quadruple-duty as a mudroom, laundry room, extra storage space, and a lab for Tina to work on her creations.

Brett plans to replace the house’s existing shed with a larger shop for his woodworking.

The living space extends outdoors, too: the deck wraps around two sides of the house, and an octagonal gazebo-style extension is a perfect place to sit in the afternoons.

Tina and Brett walk to town for as many of their activities as they can, and Tina said they love living so close to town. Although at first, they were a bit nervous about living right on one of the busiest streets in town, adjacent to an elementary school, they’ve come to love it.

The house is situated on the hill, away from the street, cuts down on traffic noise, and for the most part, the only sounds that come from the school are the sounds of children laughing. One perk of living so near the school: families stop at the stone bench in front of their house for first-day-of-school photos.

“We wanted the Prescott experience,” Tina said. “The trees, the rocks, the views, space [the property is one-third of an acre], all of it. That’s like a unicorn. It’s impossible to find.”

Tina and Brett have been married for 25 years (after a six-month courtship when they were in college). They live with their cat, Cloud, and their two dogs, Mac and Lucy. They enjoy many hobbies together: rock climbing, hiking, yoga, and biking (although Brett prefers mountain biking and Tina prefers spin classes).