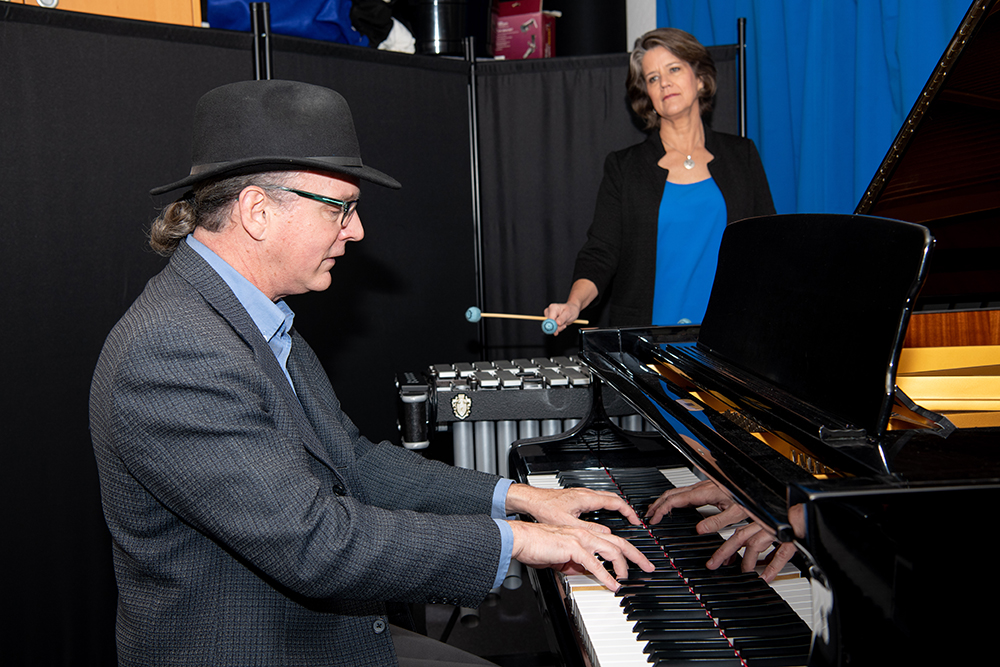 Maria and Henry Flurry have been making and teaching music for many decades. Maria grew up in Santa Fe. At thirteen, she fell in love with the marimba and timpani. “I’m all about the low notes,” she said. Henry grew up in New Orleans, where he studied piano and started composing.

Maria and Henry met at the University of Michigan School of Music, where Maria was pursuing her Master’s degree and Henry was an adjunct professor. They married, had two children, and stayed in Michigan for thirteen years. Maria performed in five regional orchestras, substituted with the Detroit Symphony and Michigan Opera Theater, backed up artists such as Roberta Flack, Ray Charles, Mel Torme, and Jim Nabors, and toured with Mannheim Steamroller.

When Maria’s dad moved to Prescott in 2002, Henry and Maria saw a chance to return Maria to the southwest and reset their focus on family and music. Henry opened a piano-teaching studio. Maria joined the Flagstaff Symphony and substituted with the Phoenix Symphony. With Maria as manager, they formed Sticks and Tones and performed in schools, libraries, and recital halls across Arizona.

In Prescott they discovered a nurturing and vibrant music scene. “I grew more as a composer in Prescott than I could have in Ann Arbor,” said Henry. He credits local music leaders such as Joseph Place, Paul Manz, Phil Kuhns, Dennis Houser, Arlene Hardy, and Will Fisher: each have led ensembles premiering his works.

Maria credits the Prescott Chamber Orchestra for growing her understanding of orchestral music through its innovative programming. She added, “In Michigan, I had colleagues who had lost sight of the joy of music. Here, I found kindred spirits who still relished the opportunity to grow into each new musical challenge.”

Henry and Maria still teach music and are involved in separate projects: Maria practicing and performing, and Henry as Arizona Philharmonic’s Executive Director. “But we’re at our best when we work together,” they both agreed with a smile. “So we’ve scheduled a few spring recitals across Arizona.”