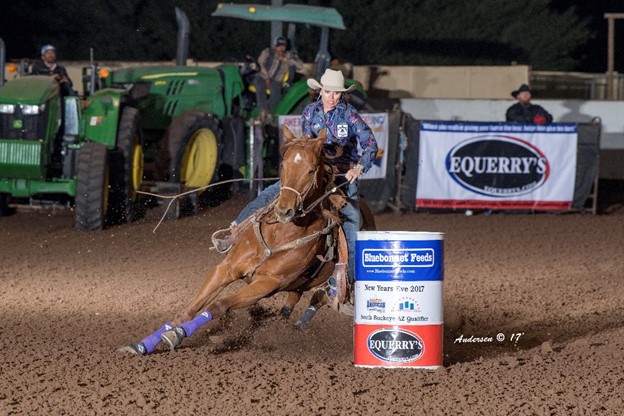 In barrel racing, the horse and cowgirl enter the arena at top speed and maneuver around a cloverleaf grouping of barrels. The duo crosses the electronic timer beam, and the timer runs until the beam is crossed again at the end of the run. Prescott native Sarah Kieckhefer is a 20-time Turquoise Circuit Finals qualifier and a 2-time Ram National Circuit Finals Rodeo qualifier. She began barrel racing at age twelve, joining her family’s rodeo tradition with both parents being experienced ropers and her brother roping competitively. She first rode in English and showjumping events, then moved to barrel racing.

“I like the speed of barrel racing,” she said. “It’s exhilarating. It’s a rush and when your horse makes a good run, it’s all worth it.” She added, “I really enjoy the traveling and friendships I’ve made over the years.”

Breakaway roping is relatively new at the World’s Oldest Rodeo; it’s a variation of tie-down roping where the rider ropes the calf but does not throw and tie it. The horse and cowgirl wait next to the chute, which has a spring-loaded barrier rope tied to the saddle horn by a string. Timing begins as the barrier rope breaks. When the competitor throws the rope around the calf’s neck and the rope is taut, the string breaks and signals the timer to end the run. Jordan Bassett Kircher of Dewey is the fourth generation of her family to compete at the Prescott Frontier Days Rodeo.

“I have roped all my life and when I heard PFD was giving women another opportunity to compete, I wanted to be a part of it,” Jordan said.

She imagined how proud her grandpa, world champion roper Joe Bassett, would be of her as she rode alongside the first women to compete at one of the most prestigious rodeos in the world. “I walked out of that arena proud to be a part of a huge women’s movement in the sport of rodeo.”

Today’s cowgirls are elite athletes who have earned the right to crown their champions. Come to the Prescott Frontier Days World’s Oldest Rodeo June 28–July 4 and see for yourself!