A Passion for Life 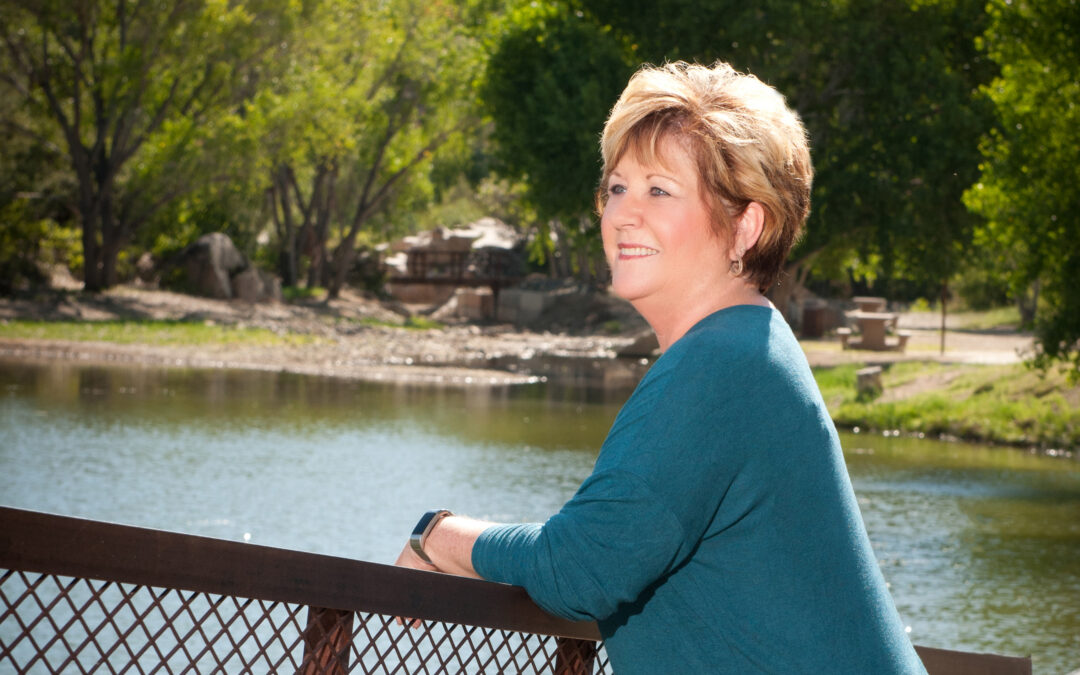 Even the most unexpected chapters in life can have happy endings.

Marnie Uhl, President/CEO of the Prescott Valley Chamber of Commerce, is living proof.

“Always believe you’ll land on your feet,” she said during a recent interview. “Keep going, no matter what. And if things don’t work out, that’s okay. It’s all about Plan B.”

Her Life in Chapters

Marnie has lived experiences about as varied as a person can: she spent 22 years as an L.A. County Sheriff’s Deputy while volunteering with the Temple City Chamber of Commerce. Meanwhile, she volunteered with the Musical Theater of Southern California, and served on the board and in other backstage capacities.

When she moved away from her native California, it was to a small New Mexico community near the Arizona border, where she lived the “country life” with her husband, her son Joshua, and lots of animals.

There, she became the President of the Springerville-Eagar Chamber of Commerce in 2000. Once her son went off to college in 2002, she began to pursue training, education, and professional development in economic development and the chamber industry.

“I developed a passion for creating a quality atmosphere for the success and prosperity of the community,” she said. “Successful business contributes to the quality of the community, because people are working, making money, and being able to enjoy life.”

When, in 2006, she saw a job posting for the position she holds now, she knew it was the right move to make. Although she didn’t know anyone in Prescott Valley, her research showed it was a thriving, growing community, and she wanted to be part of it.

“This job was an opportunity for advancement; to use what I had learned through the U.S. Chamber Institute Program and other educational programs.”

She said, “At the time, the arena was being built, the hospital was being built; I’ve seen the town grow up in a certain way. It had a lot of good stuff … the beginning for so much.”

It was inspiring, so she applied for the Chamber of Commerce President/CEO position—and got it.

Then, she received an unexpected phone call from an old friend—the woman with whom she’d been the co-leader of their sons’ Boy Scouts troop in the late 80s and early 90s. Her friend had moved to the Prescott area, read the newspaper story about Marnie becoming the Chamber President/CEO.

“I hear you’re moving here,” she said. She gave Marnie a place to stay and their friendship reconnected.

She loves her job at the Chamber.

“It’s never boring,” she said. “I have the opportunity to create a better business environment. I’m always creating.”

Soon after she made her home in Prescott Valley, Marnie became involved with the Prescott Center for the Arts (her two-year term as the President of the Board of Directors ended this past September). While she’s volunteered as the stage manager and assistant director, as well as for various jobs on the technical/production side, she’s also been cast in (and enjoyed playing) several roles.

In February 2018, a new chapter: a routine mammogram revealed Marnie had breast cancer.

“It had never been in my family history,” she said.

Her paternal grandmother had a stroke at 49, and her dad had two triple bypass surgeries (at 55 and 84).

“I was religious about mammograms. I just get them. It’s part of life like anything else. To have one come back abnormal was really a shock. I’m no Jillian Michaels or anything, but I’ve always watched my health and taken care of myself. So that came out of left field.”

Because she’d had a normal mammogram just 14 months earlier, this one revealed the cancer in its early stages. Treatment (a lumpectomy and radiation) was successful, and she’s now cancer-free—and on a mission to increase breast cancer awareness.

“At the scariest time of my life YRMC Breast Surgeon, Dr. Michael Macon, and his staff, along with the amazing team at the YRMC BreastCare Center, made me believe this was a fight I would win. For the grace of God, I’m here because I had my mammogram.” she said, adding that with all the resources women have access to in today’s world, there is no reason not to have annual mammograms.

“I look at my life as chapters,” Marnie said. “There’s the Glamorama chapter, the Cowgirl chapter, the Yaya Chapter with my girlfriends, and this chapter, here.”

While Marnie has enjoyed so many experiences—being involved with musical theater, making lots of friends through her volunteer role with the Temple City Chamber of Commerce, and being there for all of her son’s activities, she has faced some adversity, too.

But when she has, she’s met it with an inspiring resilience.

As a woman in law enforcement at a time when agencies were hiring an increasing number of women, Marnie, a divorced mom, was fortunate to work daytime shifts on weekdays. She was able to lead Joshua’s Boy Scouts troops, see his sports games, cook him dinner, and to “never miss anything.”

After her second divorce, Marnie viewed the move from the Springerville-Eagar area to her current hometown as a chance to start over.

When she was diagnosed with breast cancer, she said, “It just happened and I just dealt with it. I handled it. What choice do I have, other than handling it in a positive and humorous manner?”

“This is the only life I have. This is what I have to deal with. Am I going to let this control me?”

Marnie said she’s always been this way. There are always bumps in the road, and we all have to deal with them.

When she’s faced with adversity, she thinks, “That didn’t work out—now what do you do? You start over again.”

Marnie’s goal is to leave this earth a better place than she found it.

That goal extends beyond her professional life to her personal life. Although she’s busy with her day job, her work with the Prescott Center for the Arts, the Yavapai College Foundation, the Prescott Valley Early Bird Lions Club, and several other boards, she plans to work to increase breast cancer awareness.

During this year’s Prescott Rodeo Days, she emceed the Tough Enough to Wear Pink dinner, a fundraiser for programs in YRMC’s Breast Care Center. She hopes that her own story can inspire women to get their annual mammograms, no matter what, so their doctors can find breast cancer as early as possible.

Marnie enjoys walking her dogs, Bailey and Gracie, being a patron of the arts, and working out. But her biggest passions are her job, and being an advocate for breast cancer awareness. 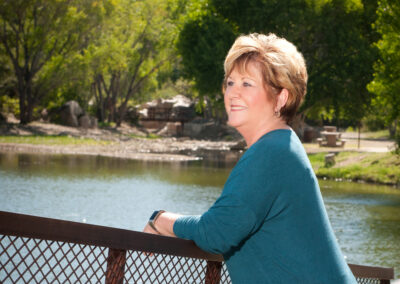 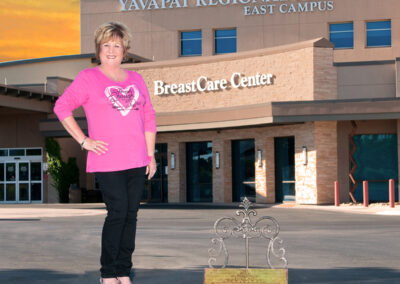 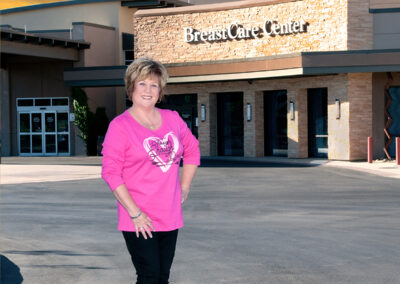 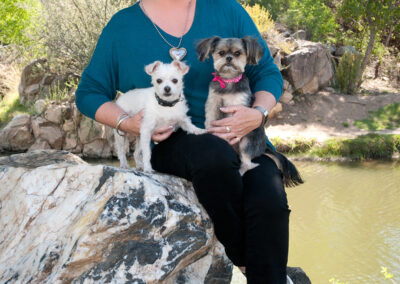 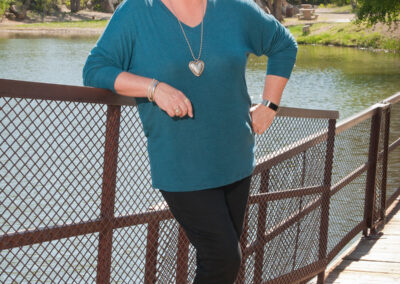 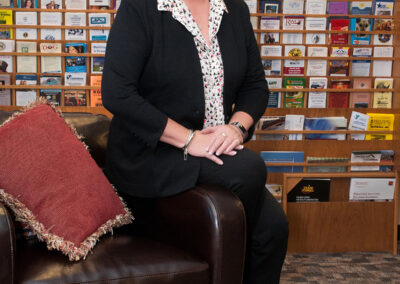 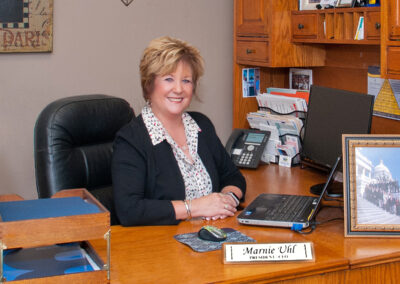