A World Traveler Who Loves to Call Prescott Home 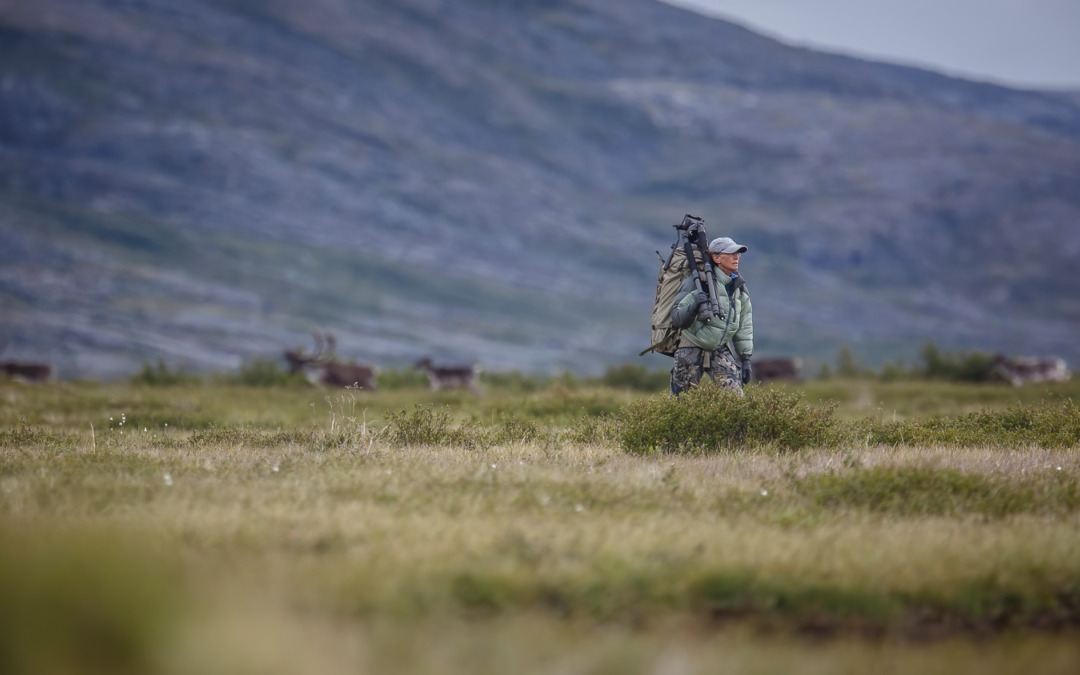 Why is a wildlife cinematographer who specializes in Arctic wildlife and underwater filming living in Prescott?

Beth Davidow and her partner Tom Campbell researched a number of places in various states when they decided to leave behind the crowds and traffic in Santa Barbara, California.

Prescott, with its welcoming small-town flavor, excellent weather, and outdoor opportunities, won out. Beth and Tom enjoy meeting people who have been part of the area for decades as well as newcomers who bring interesting stories to Prescott. Beth has a unique story and an unconventional, adventurous story of her own.

Beth owns WildEarthVisions (www.wildearthvisions.com), a production and social media company focusing on creating stories and films about wild places and our connection to nature.

Growing up near the Everglades in Miami, Florida, Beth spent much of her youth in nature. “I was fortunate to have parents actively engaged in being outside, hiking or canoeing, observing and learning about our natural world,” she said. “As a kid, I spent many a summer in classes at our local museum, exploring marine science, astronomy, and biology.”

Her love of being in nature and learning about it led her to pursue degrees in natural sciences. While at graduate school in Texas, Beth worked summer seasons as a National Park Service ranger. Three summers at Petrified Forest allowed her to explore the beauty and diversity of Arizona. She spent one season in Glacier, Montana, before moving up to Denali National Park in Alaska as a ranger, then tour guide, where she fell in love with the state and spent the following six years living, working, and photographing.

She’s worked as a naturalist on expedition ships to Svalbard in the high Arctic, made 14 trips to Antarctica, spent five weeks as a polar bear guide in Churchill, and cruised numerous seasons in Alaska’s Inside Passage.

For 20 years, she traveled between the Arctic and Antarctic as a professional still photographer, taking images of wildlife and writing natural history, travel, and human-interest magazine articles.  Her photos have appeared in publications worldwide, including the prestigious Nature’s Best competition. In 2003, while undergoing treatment for breast cancer, Beth decided to take storytelling to the next level and switched from still photography to filmmaking. She began her filmmaking adventure in 2004.

Sometimes, she arranges trips that people can go on with her. Beth enjoys sharing these special places she visits with others: “It’s a real thrill for me to be able to share these incredibly beautiful places with people to have them experience the wild and scenic magic that enthralls me,” she said.

She especially loves exploring the vast tundra to witness the caribou migration or muskox herds. Who would ever guess that this petite, physically fit woman in her late fifties spends days hiking in the Arctic tundra and Alaska with a heavy camera pack, tripod and support equipment while attempting to capture the perfect image of the wildlife she’s observing?

“The Arctic seems so far away,” she said. “We hear about it on the news but until you see it and experience its overwhelming beauty and fragility, and see the wildlife that inhabit these challenging ecosystems, it’s hard to envision the need to protect these critical spaces. So many of the birds that migrate through Prescott, or Arizona, require safe habitat in the high Arctic for nesting and feeding.  We are connected to that realm through these animals.”

While attending the International Wildlife Film Festival in Missoula, Montana, Beth was introduced to Tom, who was there as a presenter. Not long after their initial meeting, Beth moved to California to work with Tom.

They love roaming the world—their production work has given them the opportunity to travel to Mozambique, Papua New Guinea, Indonesia, the WWII wrecks in Truk Lagoon, Micronesia, the Caribbean, and more.

Still, they find that the peace and quiet of Williamson Valley, where they moved eight years ago, was perfect for long days of writing and editing.

“It was hard though,” Beth said, “because there were many distractions at our place. It wasn’t uncommon to have 15 or more species of birds at any given time flocking to our watering holes, and we love watching the deer, coyotes, snakes, and other creatures that crossed our property.”

They’ve recently scaled down temporarily to a home in Prescott Valley because new and exciting adventures are coming up soon.

“It’s been fun in Prescott to be able to share some of these adventures with others locally,” said Beth. She’s given presentations to the Audubon Society, the American Association of University Women, & the Art Guild.  “Prescott audiences are so welcoming!”

In March, Beth and Tom will be moving on to a custom 51-foot motor yacht they had built in Australia.  Because they’ve lived part time in the Far North of New Zealand for 16 years, Tom and Beth wanted to keep a connection to that island nation. They named their yacht “Tangaroa,” after the Maori guardian of the sea.

Not letting seaweed grow under their keel, Beth and Tom will remain on the move, not only as they explore aboard Tangaroa, but also as they lead dive charters to exotic locations.

Once Tangaroa is outfitted in California with the specialty equipment they will need for diving and filming underwater, they’ll head south to film whales and wildlife in the Sea of Cortez. Some of their travels in Mexico will take them to remote offshore islands in the Pacific, 230 miles off the Mexican coast.

After a year in Mexico, Beth and Tom will cruise the boat back up the coast, diving and filming through the islands off California and the Pacific Northwest before continuing north to Alaska. They plan to keep the boat up there for a few summers, cruising the Inside Passage to explore the myriad waterways, glaciers, and forests while filming the dramatic scenery and wildlife of the region.

While living at sea, they’ll be blogging, producing YouTube videos and podcasts, and writing articles for their new project documenting life aboard the yacht, the wildlife they encounter, scientists with whom they meet, and the adventures they have at www.wildlifevoyages.com

Tom is often asked how many people are needed to operate the yacht. He is the captain but says they also need a navigator, engineer, cook/housekeeper, and naturalist. Fortunately, all crewmembers are named Beth!

When Beth moved into cinematography in 2004, it wasn’t long before she was shooting with the highest quality camera at the time. High Definition (HD) was young, but she knew it would hold its value for a long time.  Tom began shooting HD in 1998 and was the first to take large format HD underwater.  Today, Beth and Tom continue to film in the highest resolution digital cinema, having moved from HD to 4K, and now into 8K.

Since they met, Beth and Tom have compiled a library of footage from their many filming expeditions that’s marketed through a number of stock agencies worldwide.  Their footage appears in productions by the BBC, National Geographic, Discovery, and other companies. In addition to filming underwater, aerials with her drone, and on land Beth edits the videos they produce.

“We love going on these adventures,” said Beth. “But it’s always nice to return to our home, and community of good friends, in Prescott. Being able to get out and go for a nice hike around Granite Mountain, or along one of our beautiful local lakes and trails in the Dells, makes us really appreciate the special location we’ve chosen to call home.”

To follow Tom and Beth on their newest adventures, visit www.wildlifevoyages.com. 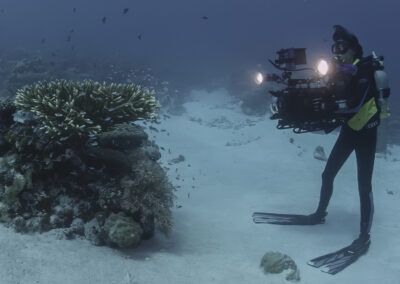 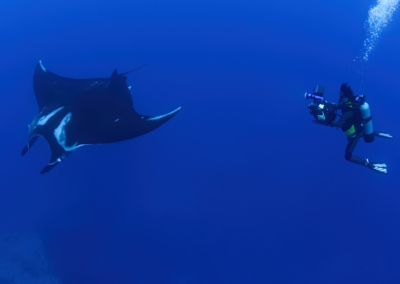 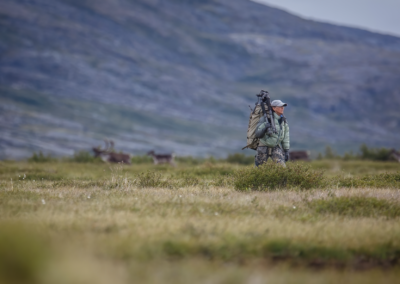 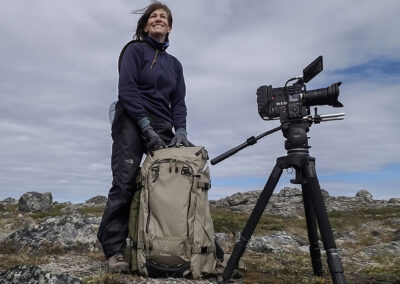