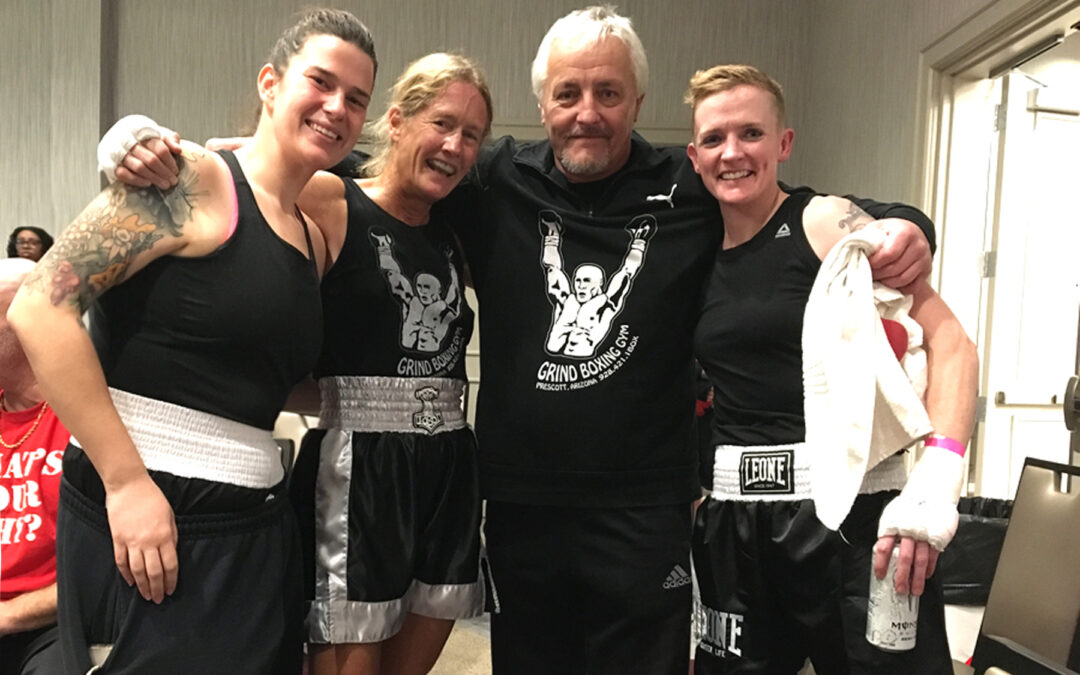 Prescott has its own women’s competitive boxing team, and it’s building pride and changing lives.

Each team member has risen to this skill level for different reasons.

Sara Holtzman, a student at Embry-Riddle Aeronautical University, described a recent encounter with a small group of her fellow students.

“Our discussion heated up and a new student blurted, ‘Wanna fight?’ Though I knew he was joking, my hands shot up and I moved toward him. Another shouted, ‘Stop! She really knows how to fight!’” Sara laughed. “I’ve become a much different person from the one who walked into the gym two years ago.”

Coach Jarek Slagowski opened Grind Boxing Gym in 2015 after 40 years coaching in Europe and New Jersey. He wanted a simple gym where anyone could get fit following real boxing training.

“I never dreamed I’d coach a women’s team,” he said. “They are highly skilled and yet so supportive of the other members. They inspire the others to push harder, not just at the gym, but in life.”

Grind Boxing Gym is licensed with USA Boxing and follows its strict guidelines. Only licensed boxers can spar and compete. Most Grind members choose the no-contact evening class with no intention to compete, but everyone works together.

Becki Gardner, an HR Professional, came to Grind last August. “I was in the worst shape of my life,” she said. “Once I got those gloves on and learned the basics in that supportive group, I was hooked. I had to compete.”

Sue Knaup, director of the nonprofit One Street, joined the gym in 2016 at age 52, and has since competed six times with four wins and three championship belts.

“I couldn’t believe I could finally learn real boxing, my dream since childhood,” she said. “We are so lucky Jarek came to Prescott.”

This February Sara, Becki, and Sue traveled with Jarek to Atlanta for a national all-women’s tournament. Each fought twice, with two wins and four close battles. They are already looking ahead to the next competitions.

This time they’ll be joined by Leslie Contreras, who works in economic development for Prescott Valley, and who, at 21, is the youngest on the team. She came to Grind last summer looking for a new fitness challenge and ended up excelling in the techniques. She said she can hardly wait to compete.

All four have lost significant weight and gained strength, agility, and self-confidence. Competition is the test of their skills learned to that point.

“It’s the first time I faced anyone who wanted to hurt me as much as I wanted to hurt them,” Sara said of her first competition in February. “Boxing training makes me feel good. Competing made me proud.”

Grind Boxing Gym at 1438 W. Gurley is open weekday evenings, when team members meet and are ready to introduce new boxers to the sport. Visit www.prescottgrindboxinggym.com.