Comfort and Support in K9 Form 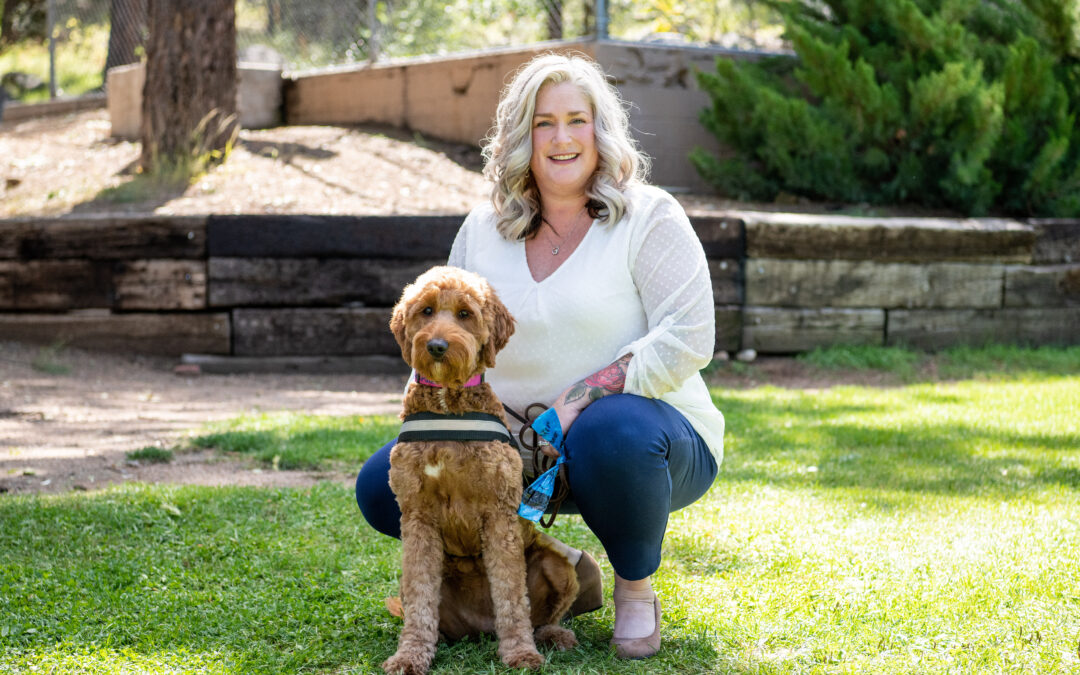 Eden, a 17-month-old Goldendoodle, is PPD’s first Facility K-9 as of February this year. She’s still in training and will become fully certified when she’s about two years old. Her job is to provide comfort and support to victims of violent crime and to first responders.

Amy Fillingim, Senior Victim Advocate in the department’s Victim Services Unit and Eden’s handler, considers their work together a blessing.

“You can see it,” Amy said during a recent interview. “Unconditional love. She’s constantly emitting it.”

Research has shown that simply petting a dog lowers the stress hormone cortisol, according to an article from Hopkins Medicine. The interaction between people and dogs increases levels of a person’s feel-good hormone oxytocin.

Starting when she was eight weeks old, Eden received special training to detect high cortisol levels in humans. When she does, she can render one of four tasks: crawl (where she gets close to the ground to approach someone), cover (sitting on a person’s lap), hug, or touch. She then stays in position until the person’s cortisol levels decrease (read Facts About Eden, page X, to learn more about her training).

Amy shared a recent example of the role Eden plays in the Victim Services Unit: a sexual assault victim came in to talk with a detective.

“You see someone come in to report something so terrible and awful,” Amy said. “You can see the fear and exhaustion on her face.”

Then she saw Eden.

“All of a sudden, her face softens, and now it’s a little more comfortable to have this difficult conversation. It’s more relaxed in the room.”

Eden sat with the victim throughout the interview, while Amy went back to her office.

“I’m so proud of her,” Amy said. “She makes the Victim Services unit at PPD that much more of an asset to our community.”

She’s an asset to the community’s first responders, too. Not only does she roam PPD’s headquarters and spend time with law enforcement officers and office staff, but she also goes to visit dispatchers at the Prescott Regional Communications Center.

When Amy filled in there last summer (she worked as a dispatcher before coming over to the Victim Services Unit), she brought Eden with her and enjoyed watching the dispatchers interact with Eden.

“You’d see a ball go flying by, and then Eden would follow. You’d hear giggles. It’s a true blessing to be her handler.”

After Yavapai County Sheriff’s Office Sergeant Rick Lopez’s murder this past summer, Amy and Eden went over to visit with law enforcement officers and members of the Yavapai County Attorney’s Office.

During a training in September, Eden crawled into a man’s lap, uninvited. Amy apologized profusely, but the man, a commander for another police department, just laughed, admitting he might be a bit stressed.

“We saw what these dogs can do in first-responder departments, in terms of healing,” Amy Fillingim said. “It’s a low-cost solution to temper some of that trauma, if she’s engaged regularly.”

In 2020, she looked into adding a Facility K9 into her Victims of Crime Act (VOCA) grant, which supports the Victim Services Unit. But when COVID-19 hit, she couldn’t make any changes to the grant before it renewed in 2023 … and Amy was forced to postpone making her goal reality.

Then, in 2021, the Department of Public Safety (DPS) bought two dogs and was unable to bring them on at the department. DPS Captain, Marcia Johnson, reached out to PPD and asked if PPD the department would like a dog—as a gift.

“I about leapt from my chair with excitement,” Amy Fillingim said. “It was like winning a year at Disneyland.”

Although the dog represents a substantial gift—$12,000 to $15,000, which includes lifetime training from Peoria-based Dog Trainer, U.S.—the community of Prescott stepped up to provide money for other necessities, including supplies, vet visits, and a “chariot”—a Ford Explorer Sport outfitted specifically for Eden with heat, humidity, and cold sensors and an orthopedic bed. Ann Harrington from Quad City Business News raised more than $15,000 through a Bowl with Eden event, and Bend Play Love Yoga raised $5,000. Olsen’s Grain donated food for life

“You see faces change; demeanors change. That permeates and radiates,” Amy said. “Dogs can make such a positive impact in so many environments such as police departments, schools, and businesses.”

Integrating Eden into her new role has come with some challenges. Initially, she was a bit timid around uniformed officers (all the scents they carry, like gunpowder, whatever’s on their uniforms, and more, can be overwhelming). Amy had to learn Eden’s signals for going out. But overall, Amy has truly enjoyed having Eden around (and she loves that handling her means a few walks every day).

“I cannot wait to see everything that she’s going to accomplish. She has already been such an asset; it will be exciting to watch her continue to engage those who need it most by bringing comfort, joy, and support to their lives.”

Eden is named to honor DPS trooper Tyler Edenhofer, who was shot and killed in the line of duty on July 25, 2018.

She’s the first full-time Facility K9 in Yavapai County and works a maximum of 12 hours per day.

At home, her vest and collar come off, and she gets to be a “regular dog,” hanging out with Amy Fillingim’s chocolate lab, Charlie, and chocolate Labradoodle, Higgins.

Eden’s trainer, Kristi Smith, Head Mentor at Dog Trainer US, explained that using scent samples, trainers train dogs to recognize when someone is experiencing a stress response. The samples include the stress hormone cortisol and adrenaline (adrenaline is a faster-acting hormone and dogs can detect it before cortisol).

Dogs can often smell physiological changes before a human even realizes they’re happening: “A dog’s sense of smell is 100 million times greater than a human’s,” Kristi explained.

Trainers then train the dogs to perform specific tasks to “interrupt the flow” of cortisol and adrenaline and start the flow of oxytocin (the “feel-good” hormone). Typically these tasks include some kind of pressure (like Eden’s “cover,” where she lays on a person’s lap).

At Dog Trainer US, trainers begin working with dogs like Eden at an early age (just a couple of months old), and then continue training them for life.