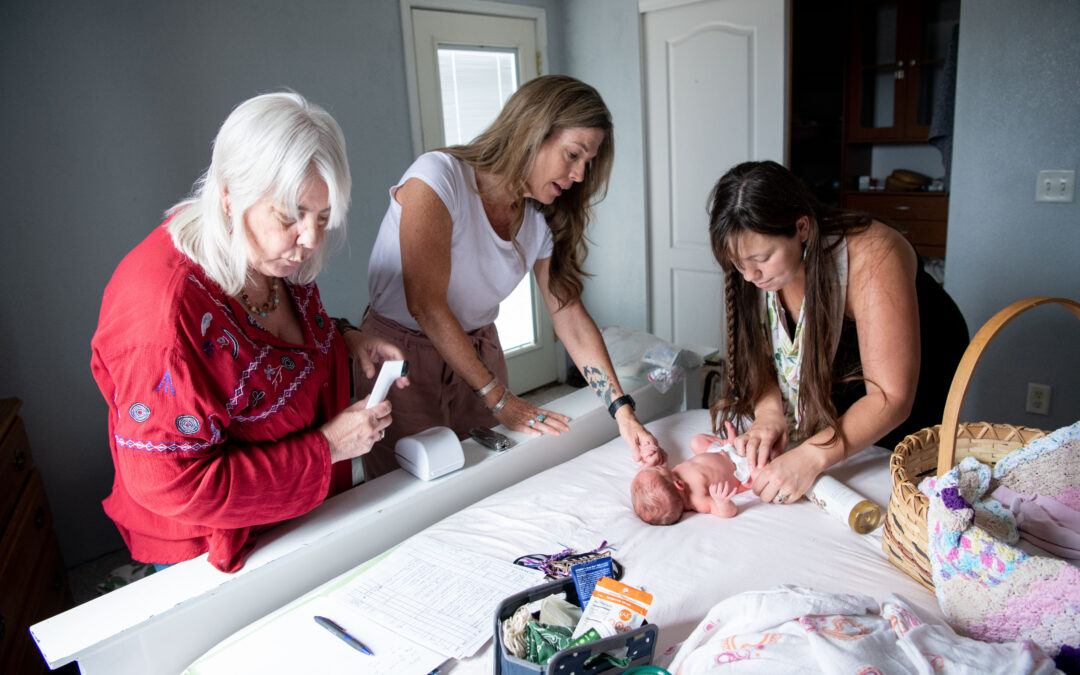 As one longtime midwife retires, leaving a legacy, she passes the torch to her student-turned-partner

A friend was going to give birth to her second child, and asked Melody to come to the hospital to care for her two-year-old during the labor and delivery.

The woman’s husband went to park the car, and during the 45 minutes he was gone (it was a giant Chicago medical complex), Melody rubbed the woman’s back and comforted her. When the husband returned, the woman asked Melody to remain by her side throughout the labor and delivery.

After that, women started asking her to come to their births, and she realized it was a calling. Another friend, a midwife, offered to take her on as a student.

She moved to Arizona in 1987 and began her midwifery apprenticeship in 1992. She went through a rigorous training program to earn her Arizona Licensed Midwife (LM) certification and her national Certified Professional Midwife (CPM) certification, and then she launched her business, Laughing Moon Midwifery.

In all, she has attended 815 births at the time of this writing, and at the end of this year, she will retire, closing the door on her business and passing the torch to her partner Carrie Kinsey, LM, CPM, who owns A Family’s Journey Midwifery.

“Melody has been such a pillar in this community,” Carrie said, adding that she’s learned so much from Melody, who took her on as a student 15 years ago.

Wonderful, intimate relationships with her clients, Melody said, have been the backbone of her business. Families return to her as they have more children, and she’s attended the births of multiple generations of some.

Carrie said one of the most important lessons she’s learned from Melody is to “just give really good care.”

Melody said it took her a long time to retire because she wanted to be sure she was leaving the practice in good hands, so clients would continue receiving the excellent care on which she prides herself.

“I’m definitely going to miss it,” she said.

She remembers almost every one of the more than 800 births she’s attended, and both she and Carrie said every birth is still magical.

“Absolutely no two are the same,” Carrie said, adding that she loves seeing the moment when a woman realizes her own strength and power as she delivers a child.

After walking the path of pregnancy, delivery, and post-partum with families, Melody said, the relationships last for a long time. Melody and Carrie host get-togethers with their clients, and often past clients invite them to baby showers, weddings, and more.

As she looks to the future of her own midwifery business, Carrie recalled the moment she knew she wanted to become a midwife.

Her first child was born via C-section, and when it came time to give birth to her second, her doctors told her that his birth would likely be C-section, too.

Wanting to avoid another surgery, Carrie partnered with a doula and had a successful VBAC (vaginal birth after C-section). During her next two pregnancies, she received co-care from an OB and a midwife, and then was able to have “beautiful home births” for her fourth and fifth.

Each experience with a midwife, she said, “sparked the idea that I really wanted to do this.”

One day she and Melody saw each other at Home Depot and Carrie mentioned that she was thinking about becoming a doula or midwife.

“She looked at me,” Carrie said, “and it was like she looked into my soul. And she said, ‘What do you really want to do?’ I said, ‘I want to deliver babies.’”

That was the moment.

Carrie became Melody’s student, earned her LM and CPM certifications, and they’ve worked together ever since, in a state of flexibility, patience, honesty, compassion, and open-mindedness … and the willingness to answer the phone and follow a calling.

Melody and Carrie explained that midwives undergo rigorous training and must practice within strict parameters, guidelines, and rules their home state sets. They receive a total education in a normal healthy birth, and in when to ask an OB to step in if the birth or pregnancy is outside the realm of “typical.” They stressed that midwives can and do work with OBs, so a woman and baby can receive co-care from both types of professionals.

For more information or to schedule an interview with Carrie, email her at midwife777@gmail.com.