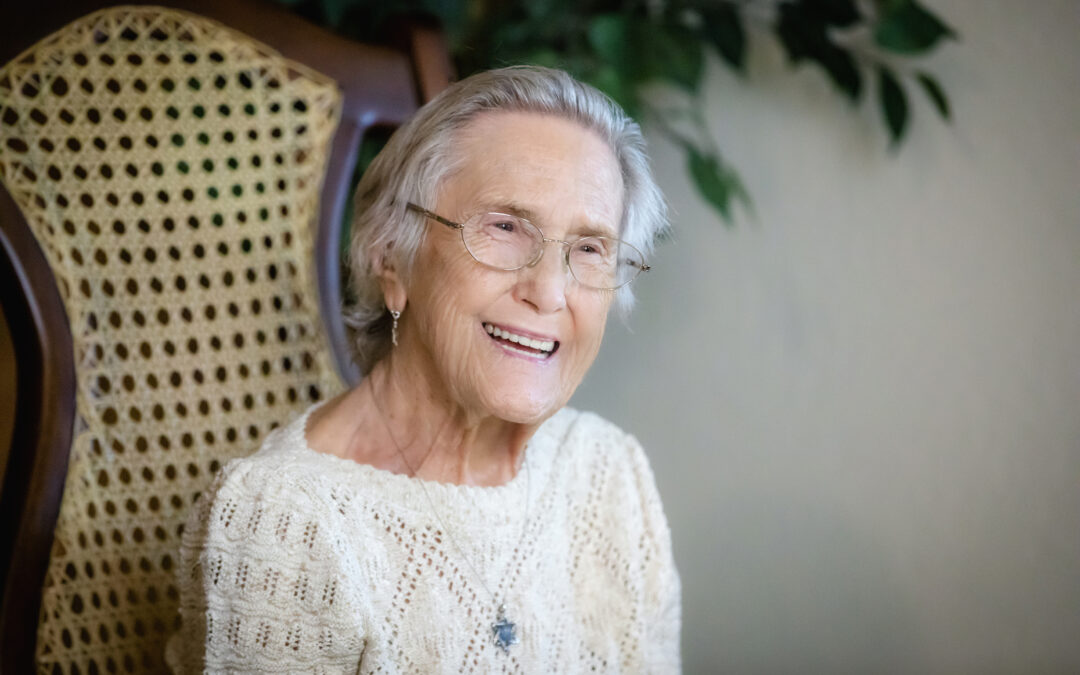 Holocaust survivor honors her parents by spreading a message of forgiveness

Esther Basch has nothing tangible by which to remember her parents—no pictures, no keepsakes, no heirlooms. What she does have are the lessons they taught her: faith, forgiveness, and love … and she infuses her life with those every day, honoring her parents and spreading an invaluable message.

Esther, the only child of Rabbi Moises Roth and his wife Fanny Roth, had an idyllic childhood in Szollosh, a small town in what is now Ukraine (it was Hungarian when Esther’s mother was born there, Czechoslovakian when Esther was born, and Hungarian again when she was 9 or 10). She and her friends picked ripe berries, raced up hillsides, and climbed trees.

She was 14 when the Nazis took over her hometown and she had to start wearing the yellow Star of David on her arm. That’s when things started to change.

“I had wonderful Christian friends,” she said during a recent interview. “We played together. All of a sudden, I was a dirty Jew. As a 14-year-old girl, I couldn’t understand how I was clean yesterday, and today I am dirty.”

At that young age, though, Esther had a unique response: “I was sad, of course, because I wanted my friends. If that’s what they feel, and that’s what they want to do, I accept it. What else can I do?”

Soon after, the Nazis moved the Jews, including Esther and her parents, into a ghetto, a square-block enclosure directly across the street from their family home. They could see their neighbors—people they’d called friends—removing their belongings from the house.

A few months later, the Germans loaded Esther and her family onto a train bound for Auschwitz. She arrived on her sixteenth birthday, and was separated from her parents.

During the next three and a half months, Esther said, “We were tortured incredibly.”

She remembers kneeling on rocks until her knees bled, and, when the German guards “wanted to have a laugh, so to speak,” they brought in dogs to kill and eat other prisoners while Esther and the others screamed in horror. She had to work sauntering handles onto underwater mines for the Germans, and burned her hand so badly she no longer has fingerprints.

Even so, Esther said, “I don’t have an angry feeling in me. I didn’t know how to be angry.”

Instead, “I felt like I have to accept what it is.” Other prisoners talked about how the messiah was going to come, and Esther held onto hope that was true, and that she’d see her parents again.

“I just kept hoping. This is how I survived.”

American soldiers liberated Esther and the other prisoners in the camp on April 14, 1945. Shortly thereafter, Esther met and married Joe Basch. They lived in several places in Europe before emigrating to North America and eventually settling in Brooklyn. Esther moved to Prescott in YEAR.

Time and again throughout her internment, Esther narrowly escaped death, and believes it’s because she’s meant to educate others—not necessarily on the atrocities she experienced, but on the power of forgiveness and love as tools for happiness.

In Auschwitz, she befriended a young woman named Helen. One day, the Nazis separated all the women prisoners into two groups: those going to labor camp, and those too weak to work … who would go straight to the gas chamber. Guards pushed Helen through a narrow opening in a barrier; she’d go to work. Esther, weak and emaciated, stood by the door crying. Just then, the barrier fell over, and Esther snuck into the group of women going to the labor camp, narrowly missing the gas chamber.

At Fallersleben labor camp, a woman named Ilonka cut in front of Esther in line for food. Ilonka’s bowl was dirty; she’d already had one serving of food. Esther became upset and the two of them began arguing in Hungarian. A Nazi guard beat up Esther so incredibly that she could barely make it to her bed … and had to remain there for days. Her kapo at the time stood in for head count (if a prisoner didn’t show up for head count, guards would find and kill her) and even went to work for Esther until she was better.

(Later, when Esther lived in Canada, she and Ilonka reconnected and became the best of friends; and, when Esther and Joe lived in Brooklyn, they came across the kapo who saved her life, Branya).

Now, almost 80 years after her liberation, Esther refers to stories like these as proof that God saved her so that she could spread her message of love.

“I cannot forget the horror [the Nazis] put me through,” she said, “but I can forgive. If I don’t forgive, if I hold a grudge, I can only hurt myself.”

Time and again, the people to whom she speaks have expressed deep gratitude for her message.

“One day when I finished my story,” Esther said, “a man comes to me and thanks me. He says, ‘I did not speak to my brother for 20 years, but if you can forgive the Germans, I’m going to go home and call my brother.’ That made me feel so good. I did something worthwhile.”

Another time, Esther and her daughter Rachel spoke at a center for juvenile delinquents.

“These kids, they looked rough,” Rachel remembered. By the end of Esther’s talk, “the room was full of teens crying.”

“They said, ‘Thank you for enlightening us,’” Esther said. “They were holding my hand until I went to the car. They were just amazed.”

Esther has received countless thank you notes, many of them from people who promise never to let something like the Holocaust happen again.