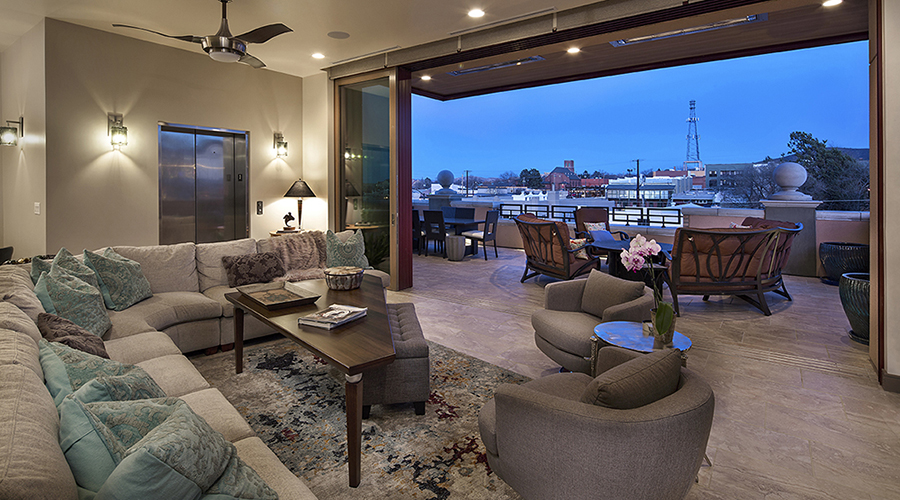 Prescott businessman makes his home in the very heart of Prescott

Living in the heart of downtown Prescott has its perks. You can walk to a variety of restaurants for breakfast, dinner, or just drinks, or to the grocery store to pick up fresh bread or a couple of steaks. And you can watch parades from the comfort of your third-floor deck, surrounded by your friends and family.

About ten years ago, Mike Fann—a Prescott High School graduate who’s lived here since he was a baby—said, he “started getting the bug to live downtown.”

Although reluctant at first, his fiancée Tammy soon warmed up to the idea and shared Mike’s enthusiasm.

“We thought,” Mike said, “’Wouldn’t it be cool to live downtown and get up on Saturday mornings, get the newspaper and go down and have breakfast at the St. Michael or the Dinner Bell?’”

At the time, he lived in a big home on five acres in central Prescott. Then, three years ago, he saw an opportunity to buy the residential lot near the corner of Gurley and Montezuma Streets—which is thirteen-hundredths of an acre—and he jumped on it.

He had the existing home relocated, and after obtaining the proper permits, began working with Michael Taylor Architects, Inc. to build a modern, commercial-style home where he could live out the downtown dream, alongside Tammy.

From the outside, the three-story, 4,900-square-foot home blends modern angles and classic bricks and pillars. And on the inside, it brings together industrial touches, thoughtful details and comfortable spaces to create a home that’s perfect for everyday living, entertaining, and enjoying the very best of Prescott.

While myriad details make the home stand out—including a full bathroom in each of the three bedrooms, a full-sized elevator, and plenty of parking in a six-car garage and a six-car courtyard outside—certain elements make it a showstopper.

A kitchen made for entertaining

The main living space comprises a kitchen worthy of the finest restaurants, with its six-burner range, double oven, and over-sized refrigerator. Instead of incorporating a formal dining room, Mike and Tammy opted for a huge island.

The countertops are a leather-finished granite called ‘cosmos’, which features a dark base with swirls of sparkling quartz and mica.

In most cases, Mike said, a big range would require a large hood. But with the range being in the island, he didn’t want the large hood taking away from the open feel of the room. So he had his contractors install two downdrafts for exhaust—they come up out of the counter behind the range whenever it’s in use, and disappear when it’s not.

A generous glass wall stands between the main living room and the main deck, and when the weather’s nice, Mike and Tammy can fold that wall away so the living area becomes an indoor-outdoor haven overlooking Montezuma Street.

The upper deck incorporates an outdoor grill, a dining table, and spacious patio furniture, so it’s the perfect place to host friends and family.

Because both flights of stairs are visible from the first-floor entryway, Mike wanted to make sure they didn’t detract from the open feel he wanted. Therefore, the contractors installed floating Jatoba wood stairs with glass railings. The stairs are anchored into a steel beam inside the wall.

A bank vault door on the wine cellar

Several years ago when a local bank closed, Mike salvaged its 18,000-pound safe door. He always dreamed of using it on a wine cellar, and as he had his new home built, he realized this was his chance.

The glass-walled wine cellar features a table with a solid acacia wood top and iron base bar, and chairs and pendant lights, so it’s a cozy place for Mike and Tammy to enjoy their wine.

Several other fun and interesting features include:

Tammy’s library in one of the guest bedrooms, complete with a floor-to-ceiling bookcase and a library ladder.

Mike’s grandmother’s bed, in which Mike’s dad was born just outside St. Louis.

A hidden pantry, where Mike and Tammy store cookbooks and small appliances, for a cleaner look.

Meaningful art, created by many of Mike and Tammy’s friends and family members.

Motorized blinds and window shades in the main living areas.

From the time they bought the lot, Mike and Tammy planned on a three-story home with limited maintenance. And now, they have it. And they’re enjoying it so much that they’d like others to join the movement.

A vision for the future

Mike says that he’d like to see downtown Prescott “become more of a living community—not just a shopping community.”

There is some residential development downtown, he said, listing off a handful of apartments and condos, but he said, “I’d love to see more people doing what we’ve done.”