“Out of Africa” comes to life at Camp Verde wildlife park 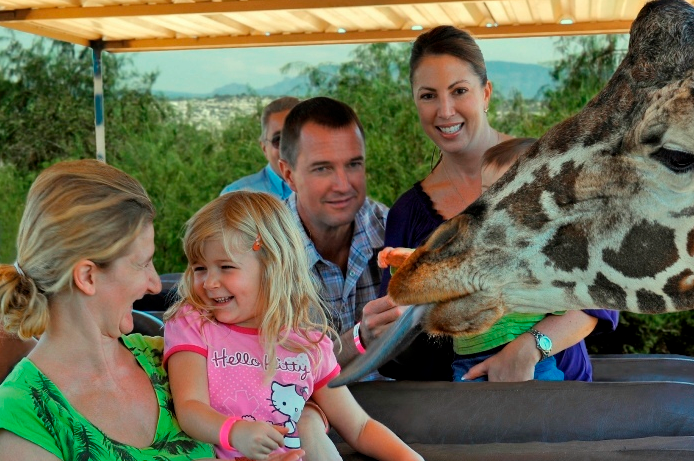 The Tiger Splash show is a sure way to draw exclamations of delight from the pre-teen visitors at the Out of Africa Wildlife Park in Camp Verde.

“He will love that one!” 4-year-old Taylor exclaimed when park staff brought out a huge parrot head balloon on a long stick for Zarah the 2-year-old Bengal tiger. Taylor came down to the park with her father from Flagstaff last December. Sure enough, Zarah plunged into the pool to grab the parrot balloon from an animal keeper who attracted Zarah’s attention and willingly jumped into the chilly pool water alongside the huge carnivore.

While Taylor would not get to pet the servals as she wanted, Out of Africa visitors can pet and feed a sloth (for an extra fee). And the general admission includes the African Bush Safari where visitors can feed a huge giraffe from the safari vehicle. Some are even brave enough to accept the giraffe’s sloppy wet kiss in their face.

The safari then drives inside fencing to the Serengeti Preserve, where visitors get unobstructed views of everything from zebras to gemsbok.

Our Serengeti guide named Mirelle Goetz offered some fascinating facts about residents of the preserve and nearby predator enclosures.

“Sage’s story is a lesson,” she said, that people should call the Arizona Game and Fish Department instead of picking up baby wildlife. People picked up and fed Sage when she was a mountain lion kitten, so wildlife officials determined she could never safely return to the wild.

Dean and Prayeri Harrison opened their Out of Africa Wildlife Park in May 2005 in Camp Verde after originating in Fountain Hills back in 1988. Some of the wild animals now have room to run up and down hills on more than 104 acres of the Upper Sonoran Desert at an elevation of 3,400 feet. The park is home to 86 species including 42 mammals, 27 reptiles and 17 birds. Some hang out while ignoring the human visitors while others, such as the highly intelligent Congo African grey parrots, enjoy interacting with people. Some originate from afar, while others such as the otter and mountain lions can be found wild in Camp Verde.

While some of the smaller animals are in relatively small enclosures, the larger animals have more room to roam. It’s about as close as you can come to a safari in Arizona, and it’s right here in Yavapai County.