Ready for a Scare? 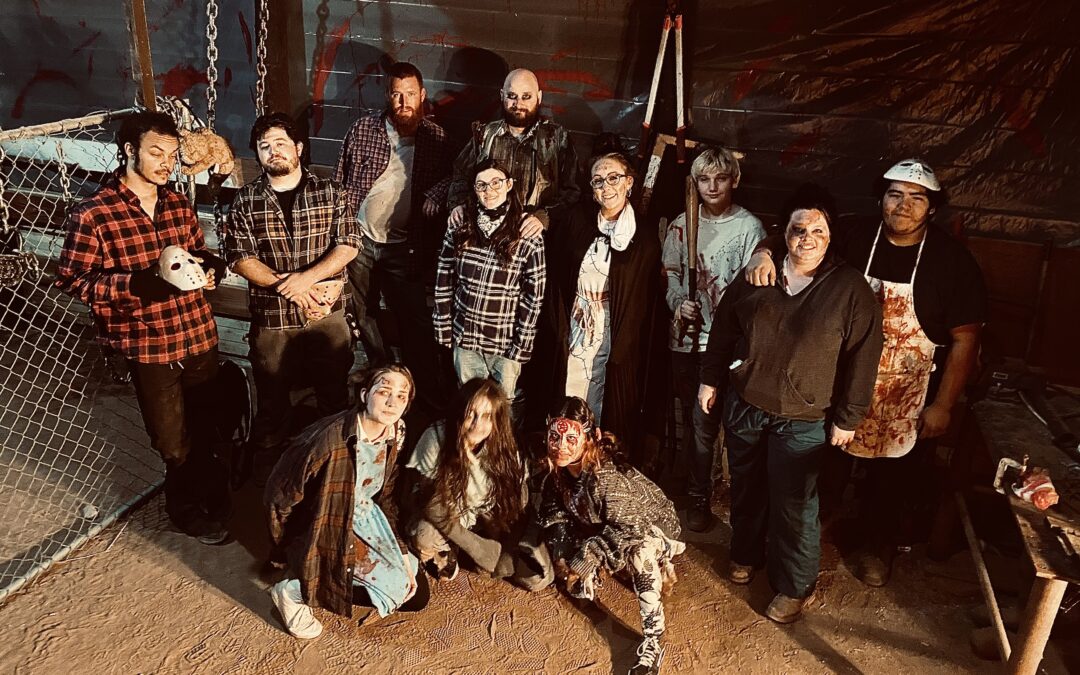 After 15 years of performing in haunted attractions, Chris Atkins is having a wicked time designing his own spooky attraction at an unusual site in Dewey.

Carnage Creek is literally located in a dry creek arroyo, creating the perfect backdrop for the “Corrupted Carnival” theme that colors this year’s attraction.

“We just want to provide a fun escape for families and people who want to zone out,” Chris explained.

It’s certainly not a money-making venture; it started out free in 2020 and Carnage Creek is charging only a $3 admission this year just to cover some of the props and costume purchases. They also encourage donations to the local Stepping Stones shelter for domestic assault victims.

The idea clearly works, because Carnage Creek’s first year attracted more than 900 people in a three-day weekend and even had to turn people away that Saturday. This year they’ve added a second three-day weekend.

“Our amazing actors gave the creek life,” related Chris, who has performed at attractions from Knott’s Scary Farm to Sinister Pointe in Southern California.

It’s a lot of work for a lot of volunteers, but Chris has some enthusiastic helpers. Chief among them is David Cummins, who was inspired to offer his three-acre Dewey property and countless hours of free labor after hearing Chris describe all the fun he had scaring the wits out of people in the Golden State.

Chris’s wife Courtney joins David and Chris in spending much of their free time building the haunted attraction at the creek every weekend from August through October. And Chris’s aunt Debbie, a local high school art teacher who also helps out in the drama department, has contributed expertise to create creepy sets.

Luckily, Courtney knew what she was getting into when she married Chris, and she was happy about it. She has a long history of enjoying Halloween, back to the days when her father turned his family’s apartment into a haunted house for trick-or-treaters every year. And Courtney came up with the catchy phrases of Carnage Creek and Corrupted Carnival.

Carnage Creek’s first year was loosely themed on a redneck backwoods nightmare with a pandemic twist.

This year’s attraction focuses on a single classic carnival theme featuring a midway, fun house, circus tent, six-foot-tall Jack in the Box, and of course, some creepy clowns and freaks.

Carnage Creek’s Facebook page offers a detailed Corrupted Carnival backstory dating to 1926 when Alastor and Dolores Wilton founded the Wilton Family Carnival. Their dream carnival began its descent into a mad nightmare after their 13-year-old daughter Claudia perished in a freak accident. You’ll have to show up at Carnage Creek to personally experience the rest of the story…

Where: 200 South Dewey Road behind Leff-T’s Steak House and Grill in Dewey; watch for “Carnage Creek” signs along Highway 69.

When: Friday-Sunday, Oct. 22–24, and Friday-Sunday, Oct. 29–31. Hours are 7 p.m. to midnight on Fridays and Saturdays, then 7-10 p.m. on Sundays. Since the haunted attraction offers various paths between sets, you can see something different if you stop by more than once.

How much: $5 admission per person, cash or card, plus accepting donations to the local non-profit Stepping Stones Agencies.

Who: Carnage Creek has no age limits, but organizers do warn parents that it features gruesome and frightening events.

What to wear: Be sure to wear good walking shoes, although organizers have tried to remove all the rocks from the creek so people don’t trip.

Pandemic precautions: For starters, it’s outdoors. And instead of standing in line, guests get to line up in their more comfortable and socially distanced vehicles. Carnage Creek even provides a movie on a projection screen for your entertainment while you wait, with sound connecting to your vehicle radio.