Remodeling: the Ultimate in Mother-Son Bonding 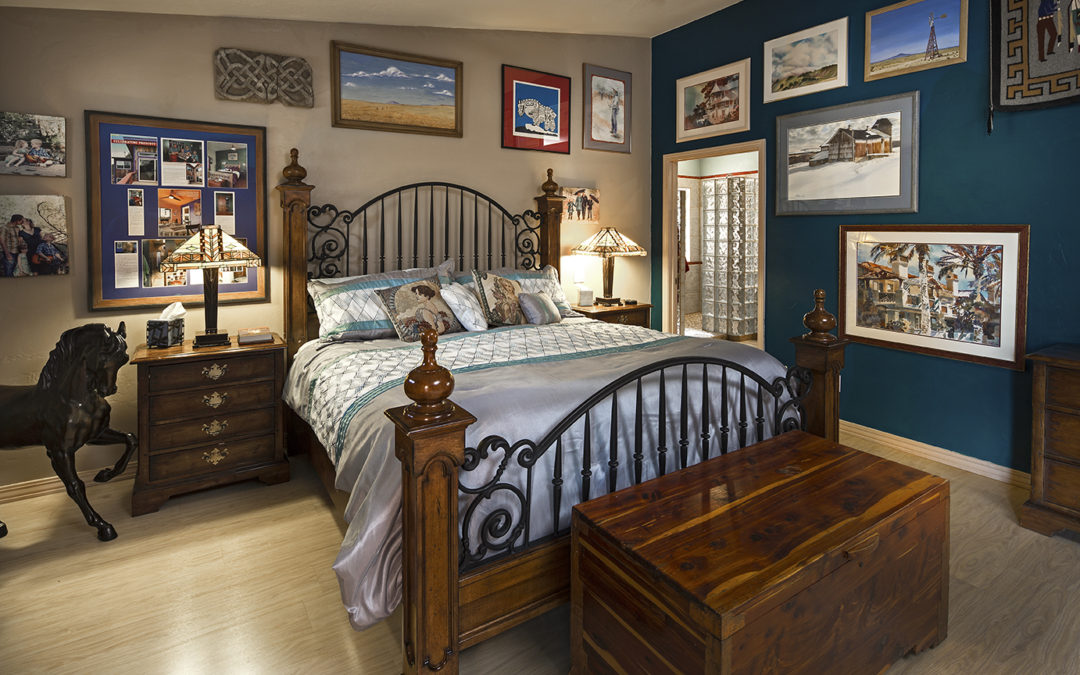 Prescott Couple Hire Son to Remodel Their House, Resulting in a Beautiful Space with Thoughtful Details … and Their Favorite Project to Date

Ron Harvey has completed myriad home renovation projects in his lifetime, but never one quite like this. What makes this project unique isn’t the material he used or the ideas he developed; it’s the fact that the clients were his parents, Alissa and Ron, Sr.

Ron, Jr. has spent the past five years remodeling his parents’ house, from one end to the other, inside and out, and the result is a stunning home that not only reflects the best aspects of the greatest designer—nature—but also highlights the artistry of the Harvey family.

An artist herself, Alissa has always been interested in design. Although her professional training was in the medical field, she has long been a painter. Growing up, Ron, Jr. took an interest in her design books and magazines, and in art.

It was this shared interest that cultivated a similar taste in design between parents and son—and made it so easy for them to work together as clients and remodel professional.

“I know how Ron thinks, and I like how he thinks,” Alissa said during a recent interview and tour of her home. “He’ll have an idea, and I’ll say, ‘What if we did it this way?’ and he’ll make some adjustments.”

Alissa and Ron, Sr. have remodeled many of the homes they’ve lived in during their 50 years of marriage and this one, she said, “was the easiest I’ve ever done.”

From Dated to Modern, in Design and Décor

About five years ago, Alissa and Ron, Sr. decided it was time for an update. Alissa knew immediately that she wanted their son to do the work. And the timing was perfect: Ron, Jr. was planning to leave his teaching career and go back to school to be a radiologic technologist, so he’d have more time for this endeavor.

He started in the master bathroom, removing walls, raising the ceiling, and putting in a new, wheelchair-accessible shower to replace the one Ron, Jr. said was cave-like.

“My dad gets a little claustrophobic,” he said, so visions of an open shower drove the design. The result: a walk-in shower made ultra-bright, thanks to glass block walls and a high ceiling.

At the room’s other end, Ron, Jr. removed the wall that had previously closed off the bath and toilet, and replaced the bathtub with a modern, slipper-style tub. On the wall, he used flagstone and fossils for a natural-looking design reminiscent of a stream bed.

Thoughtful details throughout the room add depth and interest: each piece of flagstone features the fossilized prints of a prehistoric animals, a red line made of tile draws the eye around the space, and red glass tile accent pieces provide depth in the floor.

Out of all the changes Ron, Jr. made to the house, Alissa said, her favorite was in the laundry room. Before the remodel, the hallway that led from the main living area, past the laundry room, and to the garage, felt dark and crowded. Ron removed one of the walls, opening the space. He moved the laundry machines to a different wall and added high shelves for storage.

Ron, Jr. said he likes to add artistic touches to those places where people spend a lot of time but may not necessarily consider remodeling—like the laundry room.

“What if a place where you spend so much of your time could actually be a nice place to hang out?” he said. And now, Alissa said, it is.

The “dark corner” behind the garage door needed to go, too, Ron said.

“I don’t like dark corners,” Ron, Jr. said. “You don’t live in them, you don’t notice them, you forget them. But they haunt your house.”

At first, he told his mom it was a shame they couldn’t put a window in there.

So they bought an antique door with a window painted a mural of the Grand Canyon to go behind it—so the end of that dark hallway now looks like it’s facing out over the canyon.

That’s not the only place the Grand Canyon makes an appearance in the Senior Harvey household. Ron designed the guest bathroom’s shower wall to represent the different layers of the canyon, including the Great Unconformity, the Esplanade, and the onyx and fossil layers. Alissa selected a shower curtain that reminded her of water, to represent the Colorado River flowing through the Grand Canyon, and she hung one of her paintings in the bathroom, too.

In the living room, one simple change made a big impact: the Harveys removed the brass and glass surround on the U-shaped fireplace, and put fire glass in the base, with the gas emitter below that. Now, this centerpiece is a showstopper, with the fire making the glass sparkle while providing heat in the main living area.

The mantel is a rough-hewn piece of wood from a tree that fell during a tornado in Williams several years ago. It lends a rustic look, Alissa said, that complements the primarily-Southwestern art she and Ron, Sr. have collected throughout the years.

Both the powder room and the guest bathroom feature cabinets Ron, Jr. and Alissa found at resale shops and repurposed as vanities. The one in the powder room is a Japanese antique.

Despite the fact that the Senior Harveys have a spacious back yard, Ron, Jr. said, it didn’t feel accessible from the house. The railed-in porch extended a few feet, and several stairs led down to the rest of the yard.

Ron extended the back porch, maximizing space and minimizing the number of steps. He added ramps so a wheelchair can go from the porch to the yard.

The most significant change: Ron, Jr. built a pond that sits just behind the house, and a stream that curves around to the side.

“He’s made a whole new ecosystem out here,” Alissa said, adding that there’s a Cooper’s hawk that comes to bathe in the pond almost every day.

Ron, Jr. said that within a few days of filling the pond with water, bugs, butterflies, birds, and frogs had shown up to enjoy it.

And, of course, Alissa and Ron, Sr. enjoy it, too. “It’s just changed everything about the whole back yard,” she said. “Ron and I sit at the table in the morning and see all the birds coming in.

The stream flows from the pond, under a walkway to another seating area, and then under the house, where it’s heated and pumped back out with the materials from the Senior Harveys’ old hot tub.

On the other side of the yard, Ron, Jr. used gabions to create a fire pit and seating around it, and to section off the porch from the rest of the yard. He used some old mining artifacts as decorations.

The newly-renovated back yard has served its purposes in more ways than one. While Alissa and Ron, Sr. enjoy it daily, it also provided a perfect location for their 50th anniversary celebration, which about 30 guests attended.

“We tried to do a lot of local stuff, if we could,” Alissa said, referring to the rocks Ron, Jr. collected from Willow Creek wash to use on the bathroom walls and as a handle in the guest bathroom. He also harvested water plants from local creeks and lakes to add to the pond, and they’ve thrived.

In addition to aesthetics, Ron, Jr. enjoys looking for clever solutions, whether those solutions provide money savings or make a utilitarian purpose beautiful.

For example, he wanted to put an onyx shelf in the guest bathroom shower, but he couldn’t find any such shelves for sale. He did find some onyx tiles, and had the idea to cut one in half, diagonally, to make at least one triangle-shaped shelf (the material is fragile, and he thought he may break it when cutting it—but he lucked out and got two solid triangles out of that tile).

For the outdoor kitchen, he used corrugated steel leftover from the remodel of his own house, and for the rain collection tanks, he cut the steel gutter at an angle so that when the water ran out of it and into the barrel, it would form a kind of curtain, or sheet, of water.

“Why not use that water for art?” he said. “In Arizona, we get so excited when we get rain. So why not celebrate the action of water as something fun?”

In the seating area the stream runs along, he placed the fan component of an old windmill—which he found at a garage sale—behind one of the couches to provide both shade and a structure for plants to grow on.

In several areas, Ron, Jr. used steel skeleton sheets, the “leftovers” from steel manufacturing plants, as decorations and shade (and, in some cases, both).

Buying cabinets to use as bathroom vanities was a cost-cutting measure that was also aesthetically pleasing, Ron, Jr. and Alissa said. While some people may feel a bit of trepidation about cutting an antique cabinet to make room for plumbing, Ron said he enjoys giving new life to these story-rich pieces. He’d rather see them used than sitting in a room, gathering dust.

Alissa and Ron, Jr. say they’ve tremendously enjoyed the process of remodeling together.

“It’s been so much fun having him do this,” Alissa said, and Ron said, “I don’t think we’ve ever had any conflicting ideas.”

To see more of the projects Ron, Jr. has completed, view the galleries on his Facebook page, Anthrogenesis Design, at https://www.facebook.com/Anthrogenesis/