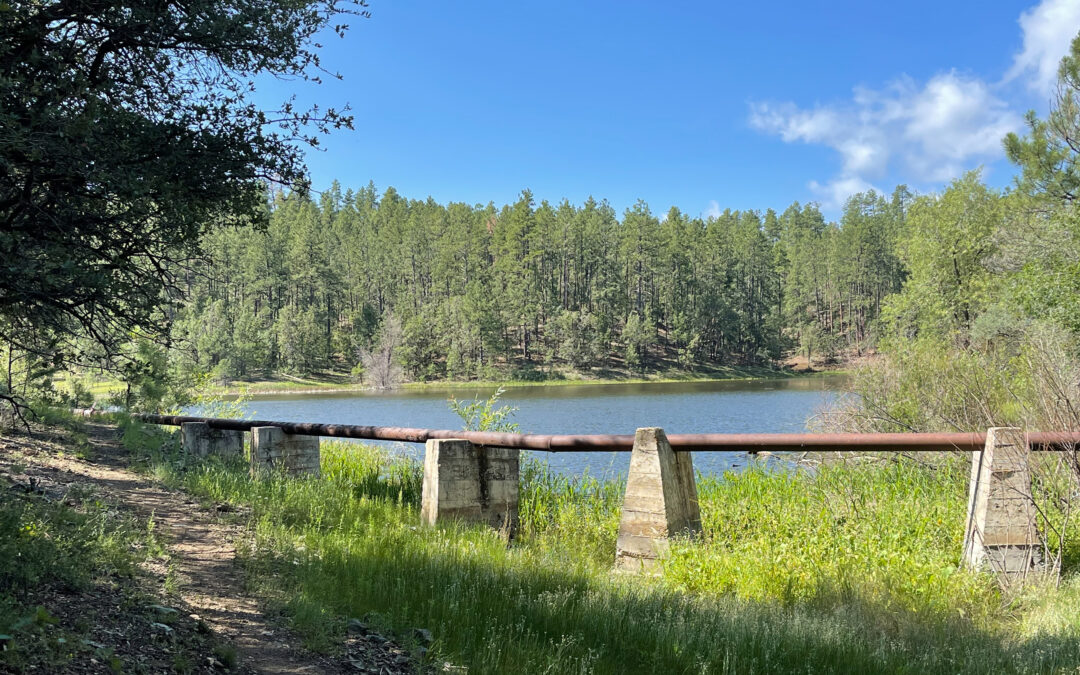 The Lower Goldwater Lake is a well-kept little secret … and it’s finally open to the public.

I know of a few local folks, raised in Prescott, who didn’t know a secret or two about Goldwater Lake.

The first revelation is that Goldwater Lake was named after Morris Goldwater. Second: there are two lakes, and they’re called Goldwater Lakes. The upper lake, which most people know as Goldwater, is actually a few years older than the upper. The lower Goldwater dam was built in the 1930s, just a few years before the upper dam.

The lower lake has been off limits for as long as I can remember. It was once a source of water for Prescott, delivered to the tiny town via a system of wood flumes.

One creature to whom the lake has never been off-limits: a bald eagle known as Morris, who has nested at this lake for years. Morris does not normally migrate but spends his time as a happy little camper with an occasional visit from another eagle. Now, we are welcome to share this piece of paradise with Morris.

So that the land-dwellers can better explore it, the Over-The-Hill gang recently constructed a new trail encircling the lake. The best way to access it is to follow any of the trails to the southern side of Upper Goldwater and head toward the dam. About ten feet up the hill from the spot where there once stood a “No Public Access Sign,” hikers will find the trail, which winds around the southern edge of the dam and down to Lower Goldwater.

The trail wraps around the lower dam and skirts the old homestead that has been on the northern side of the lake for years.

The caretakers are excited about the new trail, and the guests they will soon have (they did ask me to remind visitors with dogs to keep them on leashes, as they also have dogs on the property). They have done an amazing job at taking care of this little hidden gem. The old roses are still blooming, and they have planted new ones to create a beautiful place for everyone to enjoy.

It was such a pleasure to visit with Kevin about the history of the lakes.

The Over-The-Hill gang was still hard at work when I made my way around the newly constructed trail. I even bumped into Billy doing a little blasting on a boulder that was blocking a steep section of the trail. These guys do such good work and are so fun to visit with. We would not have the trails we do without their countless volunteer hours.

Several other improvements will take place over the next few years, including a link between the 396 and the Goldwater Lakes Loop. For now, the construction of the new loop trail is nearly complete and will be a short, easy, and fun adventure for everyone to enjoy (it’s about a mile long).

Details of the Goldwater Lake loops will be highlighted in detail on the new edition of the Prescott trails map.

This is a wonderful addition to our trail system; it is a beautiful hike you need to add to your to-do list! If you have never visited Goldwater Lakes, it is a very short drive up Senator Highway. The lakes have plenty of parking, water, restrooms, ramadas, picnic areas, benches, kayak rentals, restrooms, playgrounds, volleyball courts, and all kinds of outdoor entertainment. The city has done a great job continuing to make improvement on this area with more to come.