‘We Want Everyone to Be Seen and Heard’ 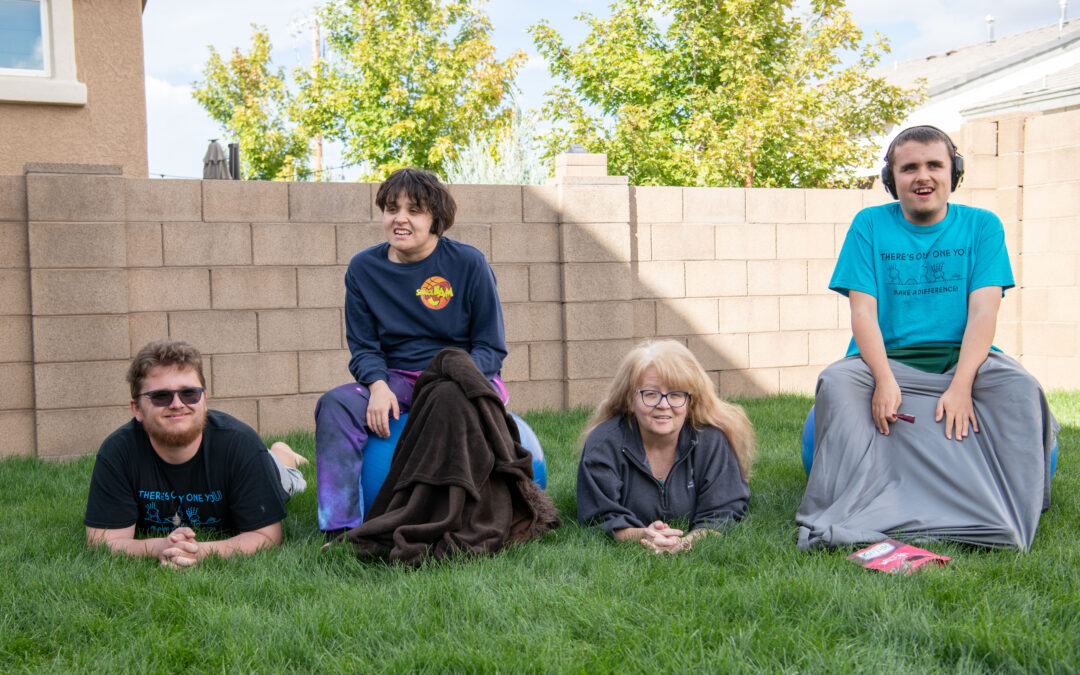 The Sweeney family is on a mission: to spread the word that although everyone communicates differently, we’re all the same in so many ways.

Two of the four Sweeney siblings, Ben, 18, and Keagan, 22, communicate in unique ways, thanks to autism. As they were growing up, people often stared at Ben and Keagan, and some even made rude comments.

“I was probably the biggest mama bear,” their mom, Joanna, said during a recent interview. “And Zach and Kendra [Ben and Keagan’s older brother and sister] were like little sharks.”

Things changed when Joanne decided to take a different approach.

“We created a different kind of place,” she said, “and that’s where we’re living now.”

In that place, everyone is welcome to communicate in their own way … and every communication style is “normal.”

Zach, media guy, co-website developer, and product developer for the family’s company, FidgetPockets (more on that below), said the whole family hopes to teach people about the various forms of communication—and the importance of inclusivity.

“You never see kids with autism not communicating,” Joanna said.

From body language to speaking, Ben and Keagan communicate all the time. They’ve gotten a little extra help from new Augmentative and Alternative Communication (AAC) Devices (also known as speech-generating devices or “talkers”). These devices are similar to tablets, and “speak” when someone presses buttons on the screen.

(A quick note: AAC refers to any type of communication other than speaking.)

Using her AAC device, Keagan described herself as “more like Joan Jett and less like Taylor Swift.”

Although she said the AAC devices have made communicating with others “a little better,” she added that people “don’t listen all that much.”

But, she said, “Sarcasm helps.”

Kendra, a pediatric physical therapist in Brighton, Colorado, said “Keagan and Ben have consistently defined and redefined what it means to be human, one hurdle of which is how to share their voice, and secondly, finding those who will listen.”

Jasmine Castigliano, Ben and Keagan’s teacher, said that when she first met Ben and Keagan, they “were trapped,” not only in their own bodies and minds, but also inside of societal norms and expectations.”

“In one of the first in-depth conversations I had with Keagan,” she said, “she relayed to me how she hated to use her AAC in public because it furthered the feeling of separation between herself and ‘others’ that she already felt. She didn’t see anyone else communicating in the ways she does and she received lots of stares and whispers on the few occasions she felt brave enough to take her talker out.”

“We knew the kids couldn’t begin to fulfill their potentials without the ability to share their thoughts, feelings, opinions, and ideas,” Jasmine said. “Their unique perspectives would do no one any good if they stayed trapped.”

This knowledge, Jasmine explained, required everyone involved to “flip the perspective.”

Everyone in Ben and Keagan’s life had a new mission: to help them feel more comfortable interacting with those outside their “safety net,” and also, to help expand society’s view of “normal.”

As Jasmine pointed out, lots of people experience embarrassment and seclusion when they feel like they don’t fit inside the small box society created.

That’s why, through two big ventures, the Sweeneys, along with Jasmine and a community of helpers, are working to spread the word that “everyone wants to be seen and heard.”

To give themselves a way to relax, Keagan and Ben designed FidgetPockets, sweatshirts with textured fabric in the pockets, also known as “the hoodie that hugs you back.”

So, FidgetPockets help people chill when they’re overwhelmed, anxious, or bored, and they aren’t noisy, so they aren’t a distraction. Plus, each FidgetPocket product broadcasts a message: “Free to Be Me,” “Be YOUtiful,” “Love Knows No Labels,” and more (people can customize their Fidget Pockets, too).

Learn more at fidgetpockets.com, or shop on Etsy at etsy.com/shop/FidgetPockets.

What started as a class project quickly grew to become a community project, with the City of Prescott stepping up to pay half the costs of installing AAC boards in public places. For each project, the Sweeneys consult with speech and language pathologist Wylanta Jones.

The first: at the Granite Creek Splash Park in Prescott. At the time of this writing, the Sweeneys planned to place another AAC board on the Courthouse Plaza and another at the Memory Care Center at Touchmark.

Beyond the Label, Kendra said, is “creating a space for all voices waiting to be heard, and inclusivity.”

The “There’s Only One YoU! Make a Difference” Program raises money for Beyond the Label.

Zach explained that in this monthly program, people nominate someone who makes a difference. Each nominee is entered into a drawing to win a free Dutch Bros. drink, a free FidgetPockets t-shirt, a gift from Lexe’s Dance Studio, and a tie-dyeing session with a local Dutch Bros. barista.

The mission: to highlight “all the beautiful ways our community already bands together,” to increase awareness, and to raise money to install AAC boards in public places.

Joanna has talked with other parents who don’t want to leave the house because they’re worried about how people will react to their children in public. But, she said, that’s why it’s so important to normalize unique forms of communication.

Zach: “Pause, be patient, and have empathy.”

Learn more about how the Sweeneys are changing the world at fidgetpockets.com