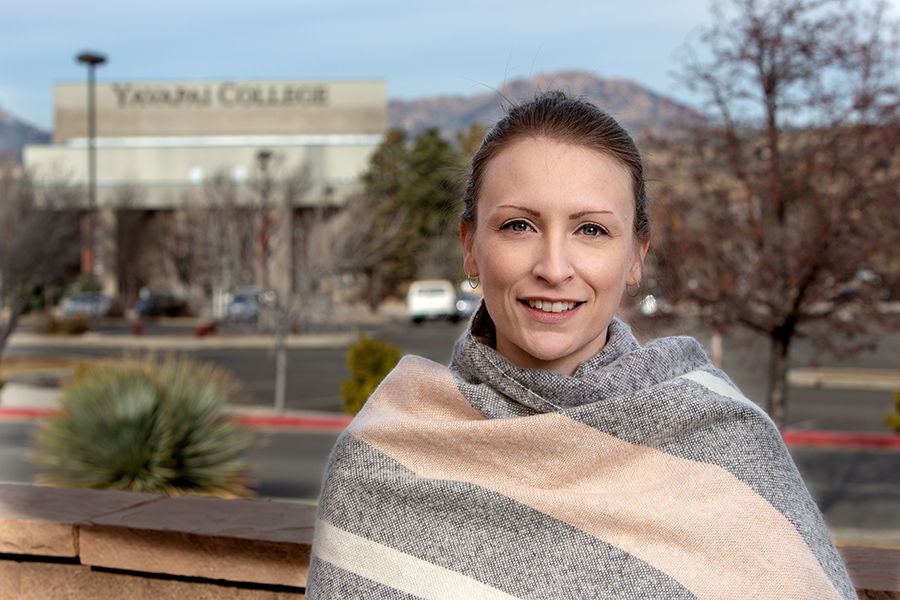 Ashley Hust recently celebrated her one-year anniversary working as Fund Development Officer for the Yavapai College Foundation, but that doesn’t mean she’s new to the Prescott community. She’s lived here for 12 years, and feels privileged to call this place home.

It was love that drew Ashley to Prescott when she began dating her husband, Jonathan.

“We did the long-distance thing for the better part of a year,” she said. “One of us had to move and I liked it a lot better here than he liked in it in Southern California.”

In the ensuing years, Ashley managed to convince her parents to retire to the area and her sister and niece soon joined the rest of the family.

Ashley has a B.A. in Communications, emphasis in Public Relations, from California State University, Fullerton, and worked in the publishing industry before coming to Arizona. She didn’t have work lined up when she arrived, but soon got her foot in the door with a part-time job at one of the other colleges in town: Prescott College.

“Even before the recession, it was hard to find professional, well-paying work in this area,” Ashley said. “I think that’s still one of the main challenges for young people here. There’s not a lot of industry. I know the City and other organizations, including Yavapai College, continue to work on that.”

Prescott College was home for more than 10 years. There, she worked in general public relations and marketing before shifting her focus to fundraising. She finished her time there as Director for Advancement Communication and Major Gifts, earning an M.A. in Advertising and Graphic Design along the way.

Fundraising felt like a natural extension of her marketing experience, and she found that it was not at all the intimidating or unpleasant thing most would imagine.

“People want to do good in this world,” she said. “Yes, ‘asking for money’ is part of what I do, but at the heart of it I help people figure out how to do good for others in a way that they find fulfilling. Whether someone says yes or no to me doesn’t change the fact that I believe in education and supporting worthy students getting a diploma or training at Yavapai College that can improve their lives.”

“It’s the kind of job that makes me happy to wake up and go to work.”

For more details about the Yavapai College Foundation, go to www.yc.edu/ycf.